A new modern campus for University College Dublin is taking shape at Belfield.

University College Dublin first came into being in 1854 as the Catholic University of Ireland, with John Henry Newman as its rector. Based at number 86 St Stephen’s Green, it grew from its initial enrolment of 17 students to much larger numbers. In 1908 it received its charter and became part of the National University of Ireland with its existing academic counterparts in Galway and Cork.

By 1960, UCD faculties were situated at various sites in Dublin, Earlsfort Terrace, Cecilia Street, Merrion Street, and Glasnevin. The yearly increase in student numbers meant that existing buildings were bulging at the seams, so a proposal to move to a brand new campus was welcomed by all.

A 350 acre greenfield site at Belfield on the south side of the city was chosen to be the university’s new location. The first sod was turned there on 7 June 1963, and construction began shortly after. UCD is to be Ireland’s first modern campus university. 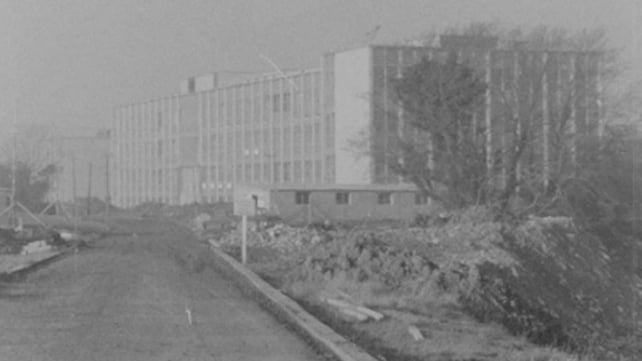 This construction project is the largest of its kind ever carried out in Ireland, and is reported to be on schedule, with physics and science blocks due to be ready for occupation by July 1964. Building will then commence on the next phase, which will consist of the lecture halls and Library Block.

An RTÉ News report broadcast on 10 January 1964.  This clip presented here is mute.