Gordon Ledbetter gives a demonstration of his phonograph machines and wax cylinder records.

Thomas Edison built the first cylinder phonograph machine in 1877 and collector Gordon Ledbetter explains the principals used to record the human voice and to play it back.

Beeswax phonograph cylinders were the medium used to record and reproduce sound. They were ideal for recording, as wax is soft, but also they had disadvantages. They wore out quickly and with just 100 grooves per inch, playing time limited to two minutes. This narrowed the field of what could be recorded.

Over time, the basic photograph design remained fairly unchanged . The only difference between Edison’s earliest machine and Gordon Ledbetter’s Edison Phonograph from 1906, is that it has a clockwork motor. The original machine was operated by a hand-crank.

To set up an Edwardian disco all you need was a case... full of cylinders, the equivalent of the record rack today, and a strong wrist to wind the motor.

A 1910 gramophone has the addition of a leather horn, for prestige purposes only, but apart from that it is like every Edison standard phonograph.

The technical ideas behind the phonograph are not very complex and Gordon Ledbetter believes it could have been invented at any point over the previous 2000 years.

There is no element in the recipe of making a phonograph or a talking machine which could not have been invented by the Romans.

The most sophisticated element used in a phonograph is a thread screw and this goes back to the time of Archimedes.

The phonographs biggest competitor, the Gramophone began marketing four minute discs and Colombia had a machine that could play long playing records. Competition was fierce, with manufacturers taking out advertising space in every periodical available.

For a while gramophone and disc recorders existed side by side but ultimately Gramophone won the battle of sound reproduction. 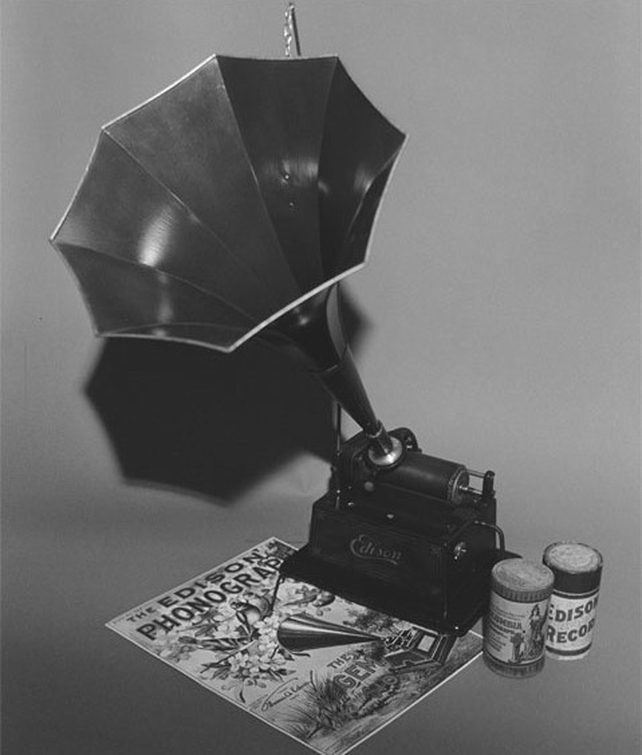