As Ireland’s accession to the EEC required a change in the Constitution, a referendum was held on 10 May 1972. The Fianna Fáil government and Fine Gael called for a ‘Yes’ vote. The Labour Party, trade unions and Sinn Féin campaigned for a ‘No’ vote.  Turnout in the referendum was 70.9 % and the result was an overwhelming 83.1% result for the 'Yes' campaign.

Given the apparent benefits Ireland would accrue on accession, it was generally accepted that the ‘Yes’ side would win. Nevertheless Anthony Coughlan of the Common Market Defence Campaign is unhappy with the result, saying the electorate had believed the

Lies, propaganda and the false statements that have been so widely disseminated by the government and Fine Gael over the last few months.

For the former Stormont Minister Roy Bradford the result shows Ireland is willing to face the realities of it's position on the fringes of Europe in the 1970s. Minister for Finance George Colley says while the economies of Britain and Ireland are very greatly enmeshed, one of the attractions for Ireland going into the EEC is

The rules governing the conduct of trade between the two countries will be determined by all the countries of the enlarged EEC and not just by the British government of the day.

Taoiseach Jack Lynch thinks EEC membership will have an impact on the partition question as people north and south will be brought together in the European Community.

Will have mutual problems to solve and I think the border will be transcended in our mutual efforts in this respect.

Farmers on both side of the border are preparing for entry to the wider Europen market and anticipating higher prices for their animals and goods. Minister for Agriculture Jim Gibbons is confident the EEC prices

Will be far better than they’ve ever got before.

For Irish farmers, the lifting of quota restrictions will mean

The full potential of Irish land will be opened up and the capacity that we know we've got will be turned to our advantage for the first time.

A ‘This Week’ report broadcast on 24 December 1972. The reporter is John Bowman. 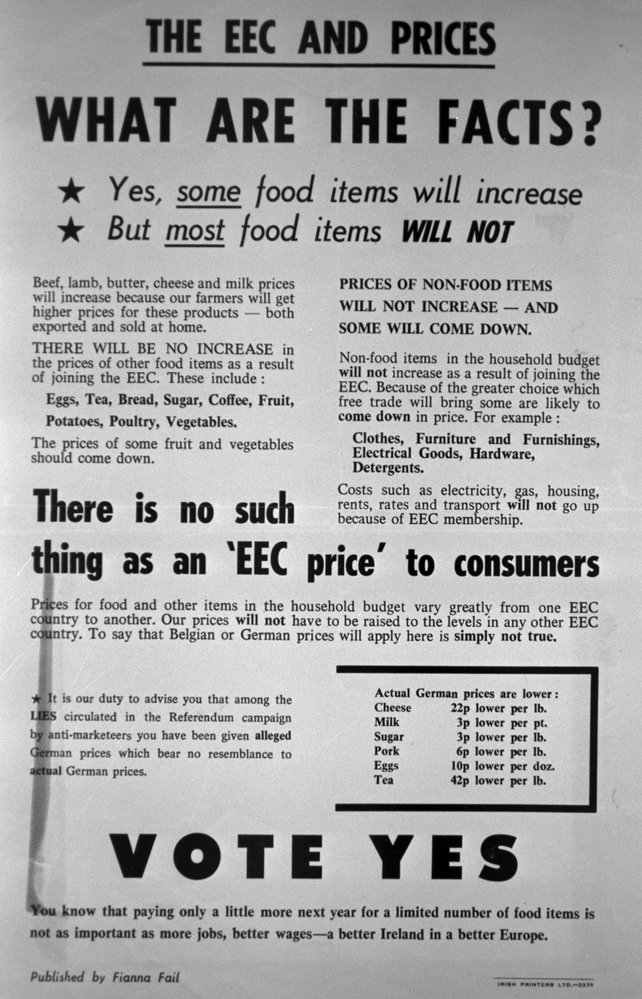