Responding to the question as to whether his writing is religious or not, Francis Stuart explains that he has never taken a moral attitude about anything in his work.

As for preaching. I hope I never preach in my fiction 'cos that is a disaster for fiction, for art in any case.

According to the RTÉ Guide,

Stuart talks to Patrick Gallagher about a life in which he has seemed to welcome the role of outcast, to the point where the scaffold itself became more than a metaphor. 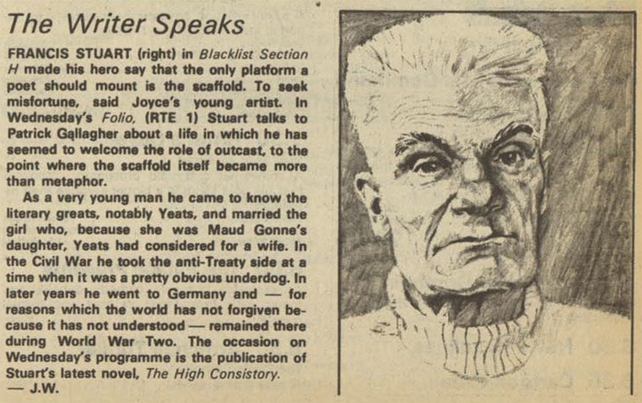 This episode of 'Folio' was broadcast on 18 January 1981. The presenter is Patrick Gallagher.

Francis Stuart was born in Australia in 1902. He married Iseult Gonne, daughter of Maud Gonne, when he was 17. Stuart died in Ennis Co. Clare in 2000.