Broadcaster Larry Gogan is one of many who have provided the commentary for RTÉ for the Eurovision Song Contest over the years.

In 1981 the Eurovision Song Contest was held at the RDS in Dublin following Johnny Logan's win the previous year. The contest was hosted by Doireann Ní Bhriain. The United Kingdom won with the song 'Making Your Mind Up' performed by Bucks Fizz.

Bucks Fizz's performance included a dance routine where the two male members of the band, ripped the skirts off the two females to reveal mini-skirts underneath and is often described as one of the defining and memorable moments in Eurovision history.

Bucks Fizz are presented with the trophy by last year's winners, composer Shay Healy and singer Johnny Logan. Larry Gogan comments on Shay Healy's dress jacket which is covered in money symbols, which he got specially made to show how much money he had made out of composing a winning song for Eurovision. 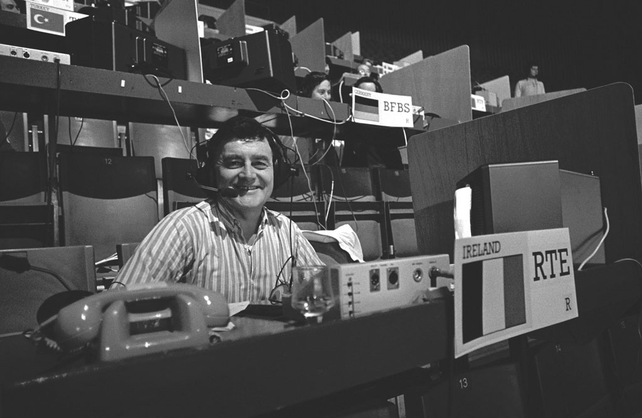 Larry Gogan in Commentator's Box at Eurovision in Gothenburg, Sweden (1985)