A look behind the scenes at Eurovision 1987 in the lead up to Johnny Logan's second win and Ireland's third.

A behind the scenes look at Johnny Logan's second bid for the Eurovision Song Contest title in Brussels in 1987. Kevin Linehan reports for Evening Extra on the build up to the contest and Johnny's win for Ireland.

Linehan comments on the confusion at the contest over the names of contestants, commentators and production staff.

Johnny Logan went on to win at the Palais Du Centenaire in Brussels with the song 'Hold Me Now'.

Ahead of the live performance Terry Wogan gives his view on Johnny's chances of taking the title, and chats about his tongue-in-cheek approach to the contest. On the Eurovision, Wogan comments

It's an exercise in foolishness really. I mean it's just a competition.

Ian McGarry, Head of the Irish delegation, comments on his input into the contest. Avril Macrory, Head of RTÉ's Variety Department, comments on the prospects of Johnny winning and the implications it will have for RTÉ.

Tension mounts backstage as the votes are called out and there is euphoria when Johnny wins for a second time.

'Hold Me Now' went on to hit the number 1 spot in Ireland and Belgium, and number 2 in the UK. 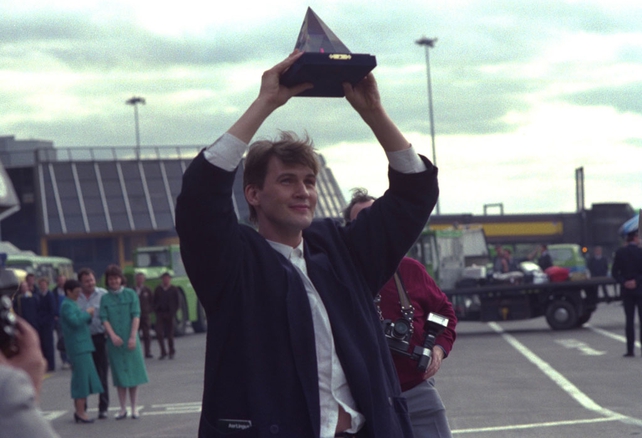 Johnny Logan after his Eurovision win (1987)