Broadcaster Joe Duffy and his wife June introduce their triplets Ellen, Ronan and Seán to 'The Late Late Show' audience.

Broadcaster with RTÉ Radio 1's 'The Gay Byrne Show' Joe Duffy and his wife June Meehan welcomed their triplets Ellen, Ronan and Seán into the world on 28 March 1995.

Now the triplets are almost six months old, Joe and June describe how they have adapted to life as parents of three babies. The key to survival is being incredibly organised, after that

It’s not hard work every day is fun.

Over the six month period since their birth, the triplets are down from 20 bottles a day to 12, from 120 nappies a week down to 100 and from 10 refuse sacks of rubbish to seven.

Joe and June are grateful for the support they receive from family and friends. In the early days having somebody to help at night was also invaluable. Joe also recommends having a designated nursery room kitted out with a sink and a fridge, two armchairs and three cots.

The babies operate on different schedules and while Joe can leave to go work, he is aware the work is unrelenting for the person left at home.

I had weeks off over the summer and by God did I rush back to work.

June has taken a year off from her work as a project manager with the Combat Poverty Agency and she is loving every minute of life at home with the children.

If this wasn’t what you wanted, if you didn’t want to have three kids it would be very, very tough, it would be hard work and you wouldn’t enjoy it.

The couple receives Children's Allowance of £170 child a month for the three babies. Joe notes this amount is adequate for people with decent jobs, but he cannot imagine how lone parents manage.

This episode of ‘The Late Late Show’ was broadcast on 8 September 1995. The presenter is Gay Byrne. 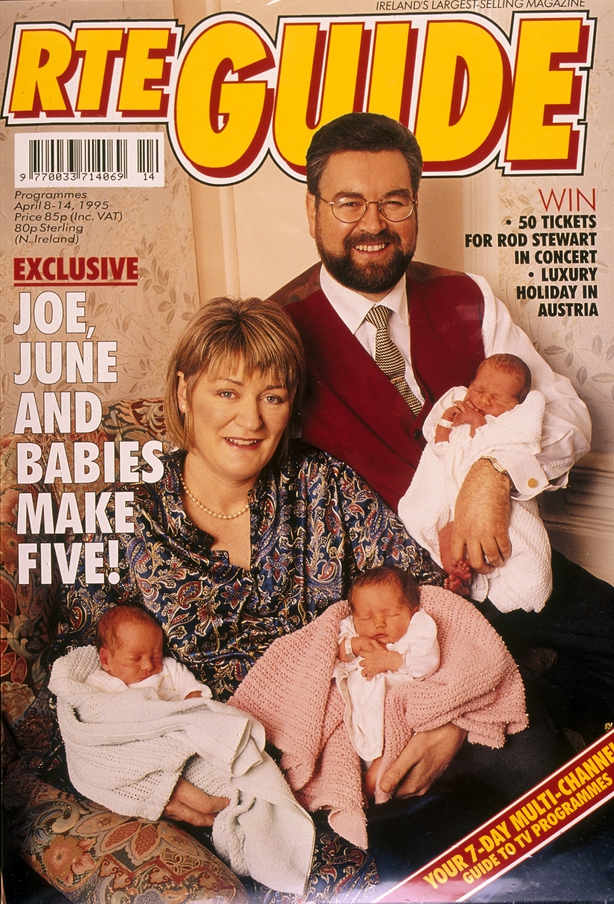