Restoring a living building that is also a work of art is the challenge for the team at work on the Custom House in Dublin.

An architectural team from the Office of Public Works have been given the task of bringing Dublin's premier Georgian building back to its original intended splendour.

The Custom House in Dublin was designed by the leading English architect of the time James Gandon.  Building started in 1781 and was completed ten years later. It was the first major public building constructed in the capital as an isolated structure, and when opened in 1791 it replaced the old Custom House on Essex Quay.

Time has not been kind, however, and the building’s location near the sea has exposed it to salt damage which has corroded the white Portland stone. Air pollution has not helped either, discolouring and attacking the stone to such an extent that,

Parts of the building were so badly damaged they could have fallen away.

Five years ago architect David Slattery from the Office of Public Works (OPW) was given the job of restoring Gandon’s Georgian masterpiece in time for its 200th anniversary celebrations.

When his team began a survey of the building they found damage all over the building caused by air pollution and by original metal rods used to hold stonework together.

Their biggest issue facing them was widespread damage caused in 1921, when the IRA (Irish Republican Army) attempted to burn it down, almost destroying it in the process. Subsequent repairs have only added to the headaches of the restoration team decades later.

A failure of a later repair and an indication that there’s activity with metal expanding inside.

Fortunately, they have been able to use modern techniques such as ultrasound technology to pinpoint cracks in the stone. The Defence Forces also came to their aid, using land mine detection expertise to find out where problematic metal was located underneath or within stone blocks.

Once the building was structurally sound, work could begin on cleaning and restoring the facade, made from granite and specially imported white Portland stone.

The principle behind the restoration means that as much as the original fabric as possible is conserved. Damaged stone was re-cut to be used again in different parts of the building, ensuring that,

When completed, the Custom House will still be Gandon’s building, warts and all.

Liam Moore and his team have been restoring the statues and sculpture around the building. He demonstrated one of the more unusual techniques, which is to moulds from silicone rubber to make replicas and restore the two hundred year old stone carvings. 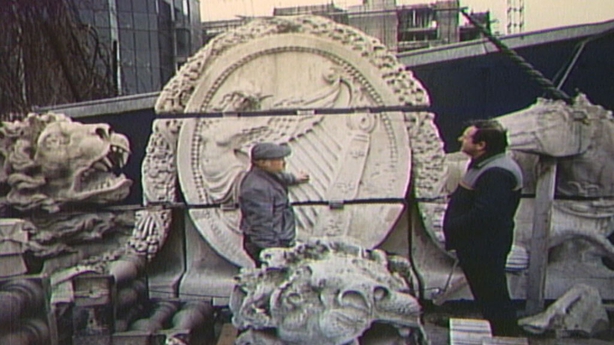 Conservationists at the Royal Coat of Arms, Custom House, Dublin (1990)

Already in use among restoration projects on mainland Europe, this technique has only recently been used in Ireland, and their next task is to restore the coats of arms of Ireland which adorn the building using this method.

'Nature of Things’ was broadcast on 31 January 1990. The reporter is Áine Lawlor.

'Nature of Things' was a series featuring science, technology and the environment. It was first broadcast on 26 October 1989 and ran for two series in 1989 and 1990.