Homes in the Walkinstown area of Dublin are the first to be supplied with natural gas.

The first house in Dublin to get natural gas belongs to Mary Denneny on Walkinstown Road. At a ceremony in her home, the Táiniste and Minister for Energy Minister Dick Spring switched on the supply, while the Lord Mayor of Dublin Michael Keating and officials from the Dublin Gas Company looked on.

Natural gas could mean a reduction in price of 40 per cent to consumers with substantial spin-off effects for industry. While the Dublin Gas Company has faced difficulties, Dick Spring believes the use of tax payers money in the company will prove to be money well spent.

I’m confident that today is the start of something big for Dublin Gas.

Following the ceremony at Mrs Denneny’s home, Dublin Gas Company officials were busy connecting other gas customers. Some appliances are sixty years old and it takes approximately an hour to replace burners and adjust equipment in each home.

The Walkinstown area is the first place in Dublin to get natural gas and over a two year period a quarter of a million appliances will be converted, area by area. Conversion work will move westward into Tallaght, Firhouse, Rathfarnham, and Clondalkin. There are 91 sectors to be converted, finishing with Dún Laoghaire and Bray. It is estimated that by mid 1986, all areas of Dublin should have natural gas. 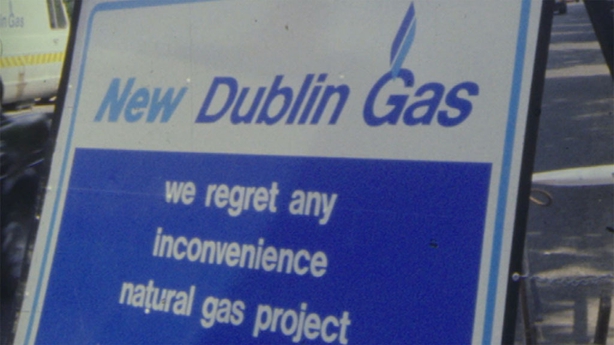