Tralee has its Roses, but Miltown Malbay has its Darlin’ Girl From Clare.

Inspired by the Percy French song of the same name, this contest opens the Spanish Point Holiday Festival. Now in its fifth year, the festival is organised by the Milltown Malbay Development Association.

Fourteen young women from Ireland and England, all with connections to the Banner County, arrive from Shannon Airport in a cavalcade of cars. Large crowds and bands were in Miltown Malbay to welcome the girls. 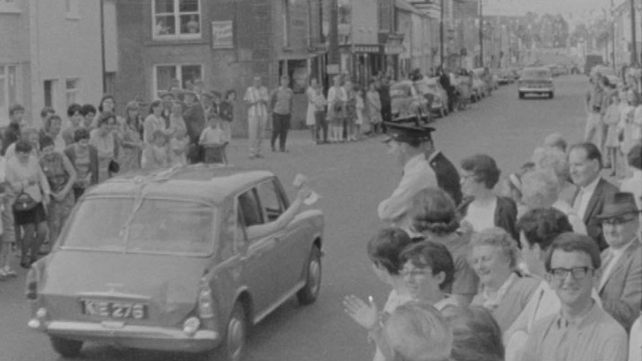 The Darlin’ Girls, who hail from Ennis, Quilty, Ennistymon, Tulla, Dublin, Birmingham, London, and Coventry, walk up the red carpet and receive their official welcome from the organising committee, and are presented to the crowds who have gathered to see them.

Chosen at contests held at dances at various locations in Ireland and England over the past year, they all have links to County Clare. What makes a Darlin’ Girl? According to reporter Brendán Ó hEithir,

While the judges deliberate, the village of Spanish Point hosts a barbeque, with sausages and crubeens on the menu.

Having eaten their fill, people return to Milltown Malbay, where the streets are alive with music and dancing. The winner of the Darlin’ Girl contest is announced just after midnight - 22 year old Maura Barry from Kilmaley. She wins a trip to the US and will have the honour of representing her county at events over the coming months. The festival will run for a further two weeks.

This report for ‘Féach’ was broadcast on 31 July 1968. The reporter is Brendán Ó hEithir.