Eyre Square underwent redevelopment in recent years at a cost of £50,000 to Bord Fáilte. While it is a lot different to the old square, the park in the centre has been  retained. It has Brown's Gate and it has a statue Pádraic Ó Conaire the Irish language writer and journalist.

In his lifetime, this little gnome-like man, civil servant, sailor, Gaelic Leaguer, storyteller, writer, poet, was much loved. He was a familiar and welcome wanderer around the stoney countryside of Connemara.

Pádraic Ó Conaire died in 1928 and was greatly mourned. The Gaelic League opened a fund to honour him in his native city. Sculptor Albert Power was commissioned to make a statue. Liam O'Brian, one of the organisers of the fund said the money rolled in. He describes the sculpture as,

A charming conception. Pádraic taking a rest on a Connemara stone wall.

Upon completion, the monument was presented to the city of Galway and placed in Eyre Square.

The only artistic, outdoor, non-religious monument in the whole of Connacht.

The statue was unveiled by Éamon de Valera in 1934. It stood almost dead centre in the square on a heaped up wall of stones on green grass and shaded by trees and bushes. 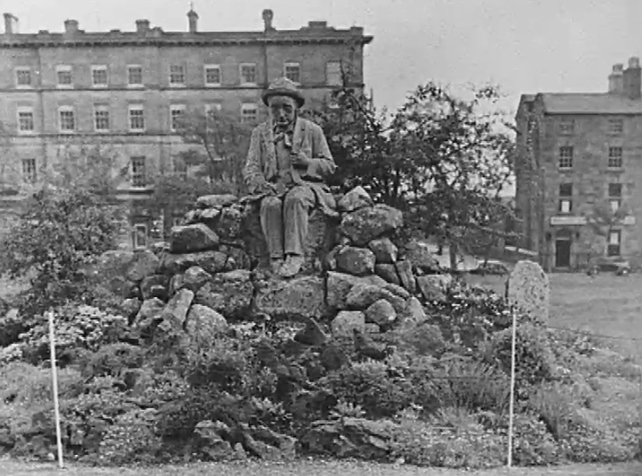 Galway grew to love this statue.

When the Eyre Square got a face lift  the statue was moved from its original site to make way for a plaque to President John F Kennedy, marking the spot where he received the freedom of the city of Galway on his Irish visit in 1963.

The people of Galway were angered when the Pádraic Ó Conaire statue was banished to a corner up against an ESB transformer station. Letters of outrage were sent to the Connacht Tribune and the Connacht Sentinel.  Galway Corporation requested that Bord Fáilte return the statue to its original location. A compromise was made when Pádraic Ó Conaire was moved to a more central position.

A 'Newsbeat' report broadcast on 21 March 1967. The reporter is Cathal O'Shannon.