Following the visit of US President Ronald Reagan to Ireland in 1984, a look back at the reaction to his visit in Galway where he received an honorary degree.

Voices of opposition and support are heard to the conferring of US President Ronald Reagan with an honorary degree from University College Galway.

Dr Richard Gault, University College Galway UCG, spoke to RTÉ News about his opposition to the conferring. Dr Gault felt that the conferring sent out a negative impression that staff at the university supported President Reagan and his policies. However, Dr Gault argues that this is very much not the case and purports that less than half of the academic staff will attend the conferring, thereby making a stand against President Reagan and his policies. Dr Gault also mentions Bishop Eamon Casey and Michael D Higgins as keen opponents of Reagan's activities in Central America. Dr Gault sees President Reagan's visit to Ireland as an opportunistic attempt to rally electoral support from the Irish in America.

UCG student, Gerald Lenihan, is in agreement with the visit and the conferring of President Reagan arguing that Ireland needed as much US support as possible from an economic and employment perspective. However, another student John Fannon opposes Reagan's foreign policies and feels that his visit is inappropriate.

An RTÉ News report by Jim Fahy and Alan McCullough broadcast on 28 May 1984. 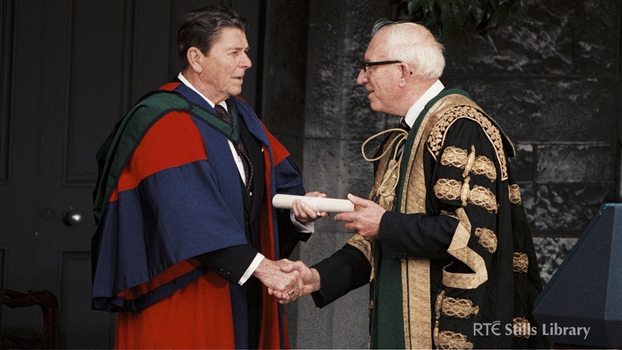