Streets of Sorrow Birmingham Six the latest single by London Irish band The Pogues has been banned in Britain.

The song was written in support of the Birmingham Six and has been banned from broadcast by the Independent Broadcasting Authority (IBA) in Britain under new anti-terrorism guidelines.

Frank Murray, manager of the Pogues, describes how the IBA came to the decision to ban the song on the basis that it alleges that some people who were convicted in British courts were in fact innocent.

Phil Chevron adds that according to the IBA, the song alleges that Irish people could be disadvantaged under the British court system. On the subject of a right to repeal the decision, Chevron says,

We just make music and in some ways, it's quite heartening that they think that we're so important to ban us. 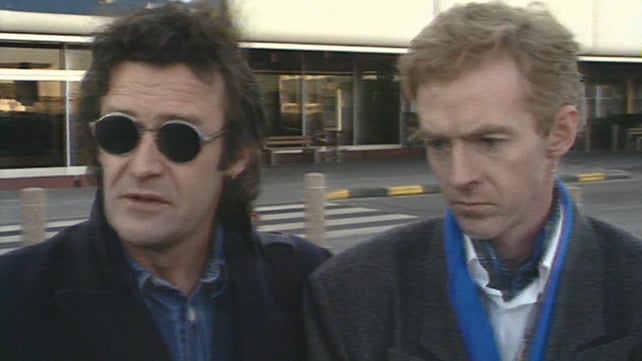 Shane MacGowan has no regrets about writing the song. He says he wrote the song to promote the cause of the Birmingham Six and to help to get them released from prison for a crime which he believes they did not commit.

An RTÉ News report broadcast on 21 November 1988. The reporter is Colm Connolly.