Philip King of Scullion performs 'I Am Stretched on Your Grave' at the Pavilion Theatre in Dún Laoghaire.

Philip King, singer and harmonica player with the Irish folk rock band Scullion introduces the song ‘I Am Stretched On Your Grave’ to the audience at the Pavilion Theatre in Dún Laoghaire, County Dublin.

The lyric is a translation of an anonymous 18th century Irish poem called ‘Táim sínte ar do thuama’ which literally translated means I am stretched on your grave.

It tells of a man who will not leave the grave of his dead lover.

And with you in your cold grave I cannot sleep warm.

The translation by the Irish poet and writer Frank O'Connor is published in his 1963 book ‘The Little Monasteries: Translations From Irish Poetry Mainly Of The Seventh To The Twelfth Centuries’.

Philip King set Frank O’Connor’s translation to music and ‘I Am Stretched on Your Grave’ features on Scullion’s 1979 debut studio album ‘Scullion’.

‘Pavilion Folk’ is a series of folk concerts recorded at the Pavilion Theatre in Dún Laoghaire, County Dublin. Scullion featured on the shows broadcast on 24 October 1980 and 21 November 1980.

This episode of ‘Pavillion Folk’ was broadcast on 24 October 1980. 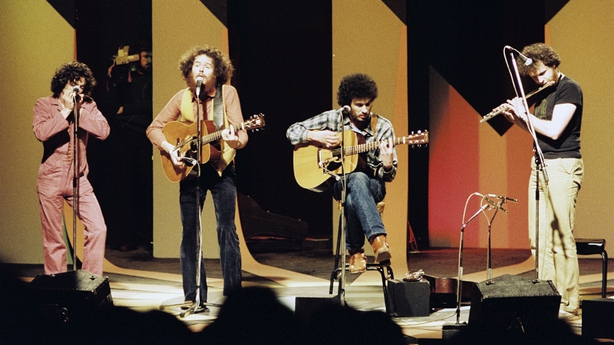