How to use the word anonn, the song Henry My Son and a tale of how a rabbit ended up as dinner all part of this Buntús Cainte lesson.

Seamus Óg Ó Tuama and Ruth Buchanan introduce this episode of Buntús Cainte providing practical examples of the use of the word 'anonn' meaning 'over to'.

Translations are provided in both English and Irish and subtitles are displayed with the Irish spelling. Illustrations are used to demonstrate the use of the word in various contexts.

Chuamar anonn go dtí an choill ansin. [We went over to the wood then.]

Chuamar anonn go dtí an portach ansin. [We went over to the bog then.]

Chuamar anonn go dtí an droichead ansin. [We went over the bridge then.]

Chuamar anonn go dtí an t-oileán ansin. [We went over to the island then.] 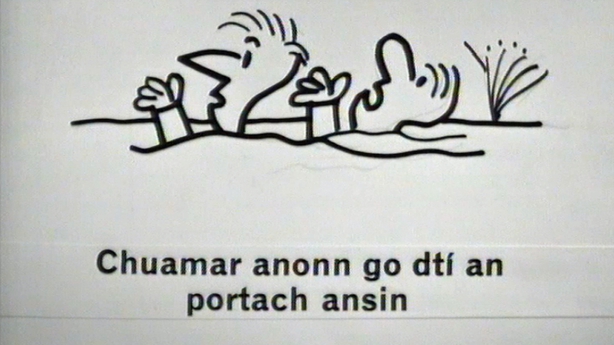 The next part of the lesson requires the learner to repeat the sentences and practice pronunciation.

Chuamar anonn sa charr ar maidin. [We went over in the car this morning.]

Chuamar abhaile sa bhus ansin. [We went home on the bus then.]

Ba é Pádraig a chuaigh anonn léi. [It was Pádraig went out with her.]

Níorbh í Nóra a chuaigh anonn chuici. [It wasn't Nora who went over to her.]

Viewers are asked to repeat the sentences to reinforce what they have learnt.

The lesson also includes a folk song in English 'Henry My Son'.

The language is then put to use in the context of a farm and the fate of a poor rabbit who ends up on the dinner table.

This episode of Buntús Cainte was broadcast on 24 October 1968. The presenters are Seamus Óg Ó Tuama and Ruth Buchanan. 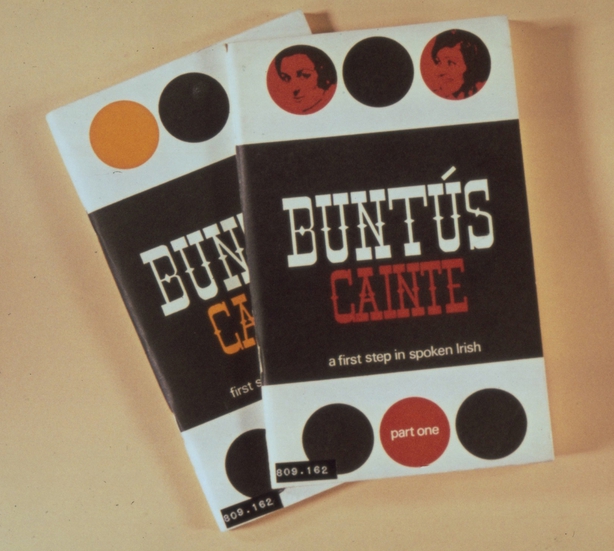 Books produced by Gael Linn to accompany the television series

Buntús Cainte was a series of brief instructional programmes aimed at beginners in Irish. The five minute programmes were broadcast each evening through the week and a compilation programme was broadcast on Sunday.

The Department of Education produced a booklet to assist viewers Buntús Cainte, while Gael Linn produced a record and audio tapes to complement the series.

Buntús Cainte was aimed at beginners and adults with school going children who wanted to improve their Irish and be able to help them with their school work. The series presenters were Maire O'Neill, Aileen Geoghegan, Seamus Óg Ó Tuama, Ruth Buchanan, Donal Cox and Bernadette Ní Ghallchóir. 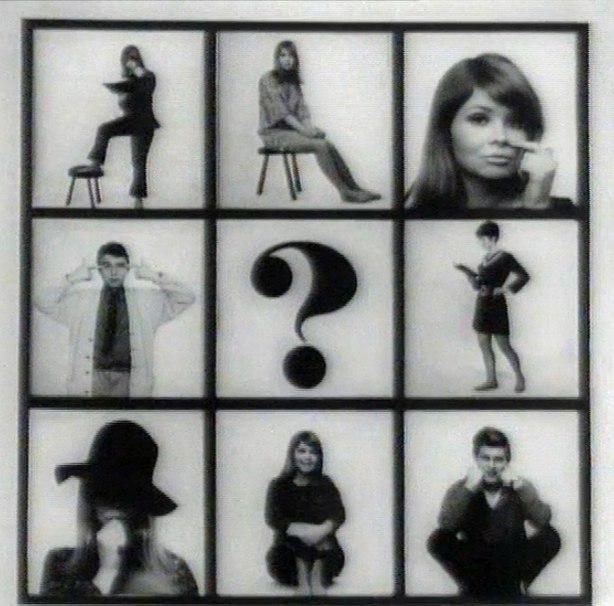 Graphic from the opening titles of Búntus Cainte  (1968)