How the power of water was harnessed to work for man in the home and factory.

In the past most of the work of spinning and weaving was done domestically in people's homes. The source of energy used in production was the muscle power of the craftspeople. At that time, machinery was mainly simple and small scale. Since then, the use of muscle power as a source of energy in industry has been replaced by the power of moving water and air.

Industry in the home gave way in importance to the mill, the works and the factory.

The Syrians, the Greeks, the Chinese all harnessed water power to help them grind their corn, raise water from the rivers, and work bellows for furnaces where iron was smelted. 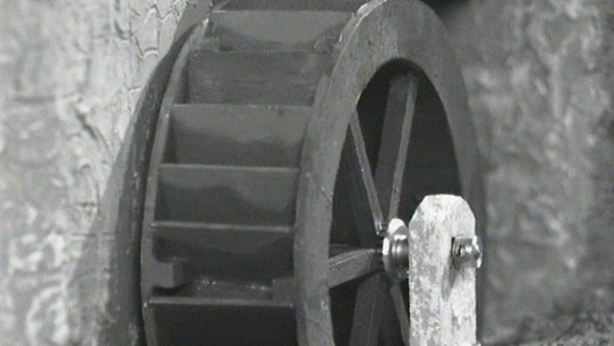 It is said that the Greeks invented another kind of water wheel that lay on its side projecting into the river to catch the current which made it turn. These wheels became popular in Scandinavia and when Norse invaders arrived in England and Ireland, they brought the technology with them and was widely used until the nineteenth century.

The type of water wheel we know best today was developed by the Normans and was used almost entirely for the grinding of corn. These mills could be found throughout Ireland at the beginning of the nineteenth century.

Brendan Scott demonstrates how a water wheel works through the use of a model.

The wheel consists of a series of buckets and the weight of the water in the bucket forces the wheel to turn.

This episode of 'Six Generations' was broadcast on 22 January 1970. The presenter is Brendan Scott.