A new runway at Dublin Airport is officially opened by An Taoiseach Charles Haughey.

The opening of the new £35 million runway is well timed to cope with the demands on Dublin Airport as the aviation industry continues to grow at an unprecedented rate. In 1989 Dublin Airport expects to handle over 5 million passengers.

The new 8,650 foot runway is designed to take super-jumbos, and its construction took two years, the largest pavement ever constructed in the country.

A special flight Airbus 320 flew in from Toulouse in France for the occasion. It picked up An Taoiseach Charles Haughey and other dignitaries from the old runway at Dublin Airport, completed a circuit of the city of Dublin, and made a ceremonial landing on the new runway.

The Taoiseach said Ireland will hold the European Community presidency when the second phase of air transport liberalisation is finalised. He also stressed the importance of improving Ireland’s aviation infrastructure.

It’s of vital importance, particularly for the tourist industry, but also from the point of view of the general economy.

The runway has not been without controversy since as local residents objected to its construction. A group of them protested about projected noise levels at the airport perimeter.

Aer Rianta have offered to meet the cost of sound proofing homes and say the configuration of the new runway will ensure that in 95% of all flights, traffic will be not be directed over residential properties.

It will be a week before the new runway is fully operational.

An RTÉ News report broadcast on 21 June 1989. The reporter is Andrew Kelly. 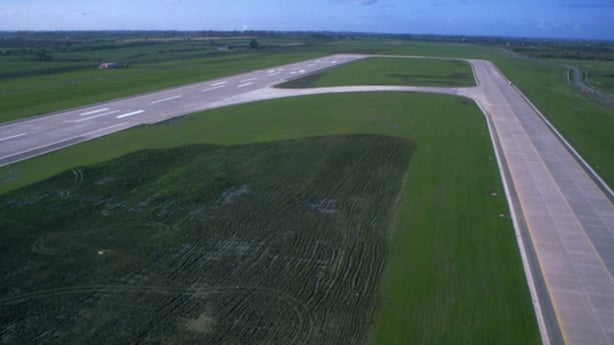