Residents of north County Dublin call for a public inquiry into plans for a proposed new runway at Dublin Airport.

Dublin Airport, the largest and busiest airport in the country is operating with two main runways built in the 1940s. These are no longer fit for purpose for the increasingly heavy aircraft and build up of traffic at the Airport.

Aer Rianta the body responsible for three main airports in Ireland, believe their proposal for a new runway running in an east west direction is the solution to the Airport's problems. It will take two thirds of all take-offs and landings and means flights will no longer come in and take-off over the heavily populated areas of Ballymun, Swords and Malahide.

Residents have formed the Airport Action Group and claim the proposal will disadvantage locals in the area as Naul and Ballymun will be linked by a ring road. This will add four miles to the journey time between Swords and Ballymun.

Chairman of the Airport Action Group Frank Wilson suggests an underpass on the existing road would be a better option, as well as being more economical.

The ring road will cause great problems for commuters in the area...it’s going to cost the community well over a million pounds a year in extra travelling costs.

Dublin Airport general Manager Derek Keogh claims the underpass proposal is a non-starter as it would be expensive to build and maintain but more importantly it would be a major security risk for the Airport. Dublin Airport is a potential target for terrorists and terrorist groups

To construct a tunnel under your main runway seems too inviting to those groups.

Aer Rianta has commissioned a video ‘Runways and Roadways’ to put forward its case. The Airport Action Group has countered with its own video ‘Community at Risk’.

An RTÉ News report broadcast on 20 November 1986. The reporter is Kieron Wood. 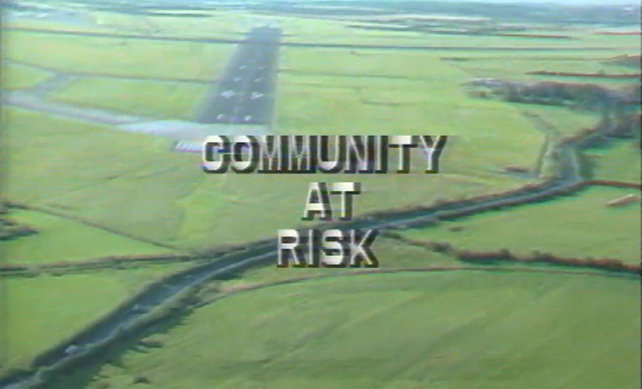