Defining the meaning of an entrepreneur leads to a heated debate at a gathering of the Confederation of Mothers of Seven.

An advertisement in the national newspapers from the Industrial Development Authority (IDA) to encourage manufacturing entrepreneurs becomes a topic of discussion for the Confederation of Mothers of Seven.

If you have the right ideas and business experience, the IDA offers you the opportunity of a lifetime.

The new IDA plan offers opportunities to become an entrepreneur. For those with the enterprise and the know-how to run a factory, the IDA is offering financial support and business advice. 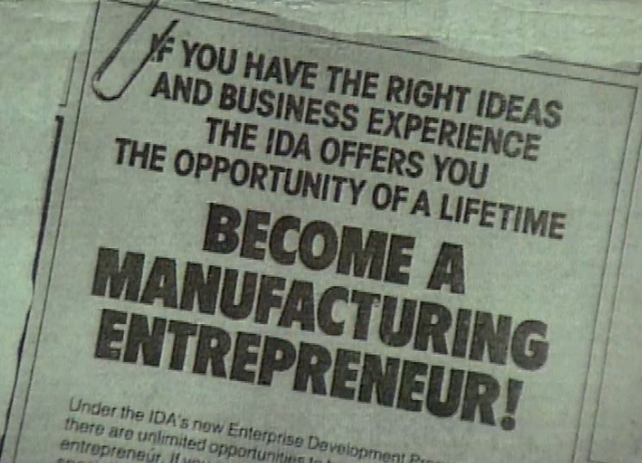 Job advertisement for a Manufacturing Entrepreneur

But what kind of people would qualify for the grants? The Confederation of the Mothers of Seven, Fanny (Pat Daly), Grainne (Paul Murphy), Rosa (Frank Kelly), and Maevis (Eamon Morrissey), debate the question over an afternoon sherry.

This episode of 'Hall's Pictorial Weekly' was broadcast on 1 February 1978. The reporter is Frank Hall.

The show ran for 9 series until 1980. In the RTE Guide on the week of its first transmission, Frank Hall wrote,