Taking a flight on Concorde Mike Murphy is well fed and gets some golf practice all while travelling at twice the speed of sound.

The RAF airfield at Brize Norton in Oxfordshire is the training base for Concorde pilots. Mike Murphy meets Chief Training Officer Captain Norman Todd, who was the pilot of Concorde's inaugural flight to Washington, and watches as a Concorde plane lands at approximately 170 mph.

Training pilots to fly Concorde doesn't come cheap. The cost of each training flight comes in at over £10,000.

On a 90-minute training flight Concorde uses up 23 tonnes of fuel.

Flying by Concorde is no ordinary affair. In the departure lounge, Mike Murphy is presented with a glass of champagne. On board, he is again indulged with more champagne, describing it as,

Undoubtedly, the toughest assignment I've been on. 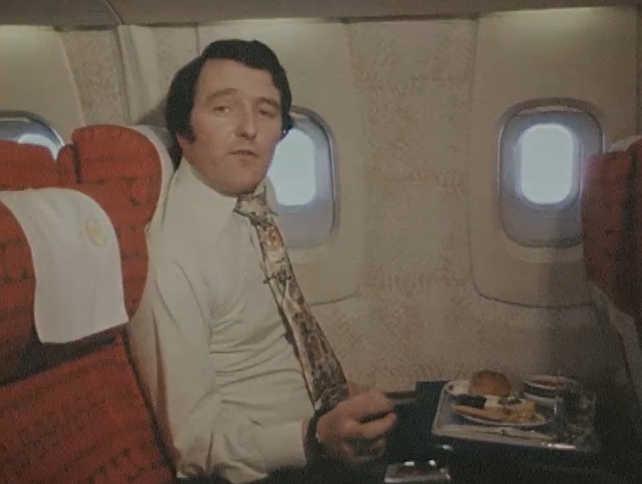 Mike Murphy flying on board Concorde (1977)

Describing his first impressions on board Concorde, Mike Murphy says it is a little disappointing. While there is more leg room and top-notch service, the windows are smaller.

Originally the designers didn't want to include windows at all.

A return fair from Dublin to Bahrain of £776 with a flight time of four hours and ten minutes, as opposed to six hours and twenty minutes on a sub-sonic flight.

The silver service catering on board is second to none. The lunch menu includes smoke salmon and foie gras canapes, chilled caviar from Iran, sirloin steak, Marchand du Vin, breast of duckling, and fillets of sole, which Mike Murphy describes as just like the food available in the RTÉ canteen.

During the flight at a speed of 670 mph, the captain makes a special announcement welcoming RTÉ and Mike Murphy on board.

I'd like to welcome on board the Irish television company.

He is surprised on a visit to the cockpit during the flight and how small and cramped it is.

We're right in the very front of a very sharp aircraft.

Now travelling at twice the speed of sound, at about 23 miles per minute.

We're travelling faster than the speed of a rifle bullet. It's quite mind-boggling.

Putting a golf ball on board Concorde while travelling at twice the speed of sound Mike Muprhy calculates that the ball travelled the equivalent of two miles in the four seconds it took to take the putt.

This episode of 'The Likes of Mike' was broadcast on 8 March 1977. The presenter is Mike Murphy.

AIRPLANE
THE LIKES OF MIKE
CONCORDE