In 1971 Niall Sheridan interviewed Irish writer JP Donleavy about his life and work for the programme ‘Writer in Profile’.

JP Donleavy was born in 1926 in the United States of America to Irish parents, but considers himself Irish. He became an Irish citizen in 1967. Educated at Trinity College Dublin Donleavy has published several novels, the most famous of which is 'The Ginger Man'.

Donleavy tells Sheridan about returning to live in Ireland again after a 20 year hiatus. He considers Ireland to be a great source of inspiration, but is less sure about whether it is a good place for a writer to live in. He feels Dublin life can swamp everything you do, whereas being a writer is

Very much a matter of being isolated and cut off from things. 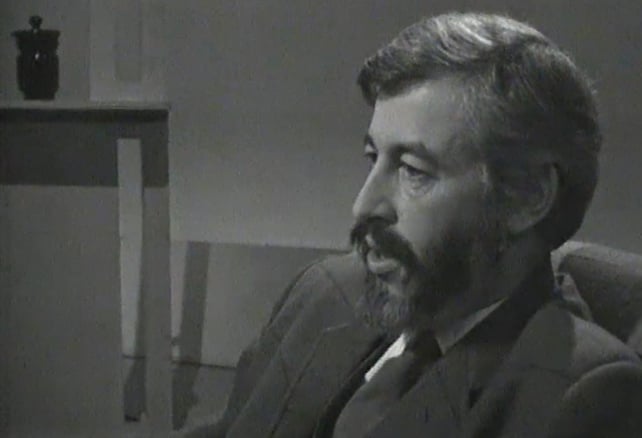 Donleavy does not see his work moving in any particular direction. He would like to return to short-story writing but finding a publisher for short-stories is difficult.

The economics of writing have a way of more of less channelling your life for you.

His latest novel 'The Onion Eaters' is set in Ireland and is about life in a country house.

‘Writer in Profile’ was a weekly television interview with a well-known Irish writer. The series was produced by James Plunkett.

This episode of ‘Writer in Profile’ was first broadcast on 26 January 1971.

JP Donleavy and The Gingerman 1994