At the turning of the sod for Teilifís na Gaeilge, Minister for Arts, Culture and the Gaeltacht Michael D Higgins defends the government's spending on the new Irish language television channel.

It will be vibrant. It will be different they say and it will hit your screen on Oíche Shamhna, Halloween night next. Teilifís na Gaeilge will be the country's first new home-grown TV channel since the launch of RTÉ 2, now Network 2, 18 years ago in 1978.

Twenty independent production companies are already at work putting together programmes that will form part of the TnaG broadcasting schedule.

Cathal Goan, Head of TnaG, says the channel will show audiences a different voice and a diversity of programming that they haven't heard before in the Irish language.

Funding of £10 million a year will be provided by the government towards the running costs of the new channel, and RTÉ is being asked to provide one hour of programming per day. 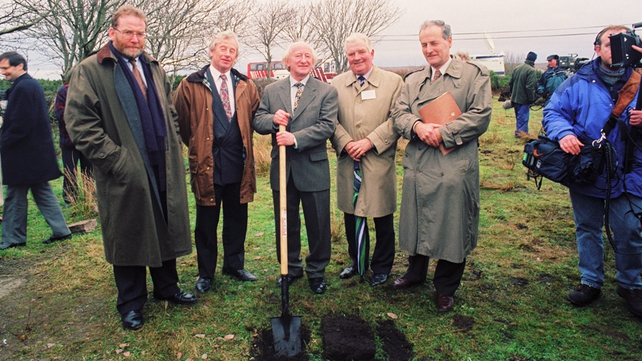 Minister Michael D Higgins officiated at the turning of the sod for the station's new £2 million headquarters in Connemara. Minister Higgins defends the government's financial backing for the project and anticipates the role of Irish language television in the future of broadcasting.

At the turn of the century we'll have a choice of hundreds of channels on television. Wouldn't it be quite extraordinary if not one of those could be one that could deal with the Irish language.

An RTÉ News report broadcast on 12 January 1996. The reporter is Jim Fahy.