With over 175,000 workers employed in the construction industry in 2000, the availability of work and work conditions for construction workers were very different from today.

On 16 February 2000 hundreds of construction workers walked off building sites across Dublin in protest at pay rates and inadequate pension schemes. The protest took place at Leinster House before moving on to the headquarters of the Construction Industry Federation (CIF).

Workers from the Dublin Alliance of General Constructive Operatives were calling for an independent pay review, and an investigation and review of the 'bounty-hunting' scheme, which rewards trade union representatives who recruit workers to the pension scheme.

The protest centred on a widening gap in pay rates between general workers and craftsmen, and the growing abuses of sub-contractors in the industry.

At the time there were an estimated 175,000 building workers in the country, with only 37,000 registered under the pension scheme.

An RTÉ News report broadcast on 16 February 2000. The reporter is Peter Cluskey. 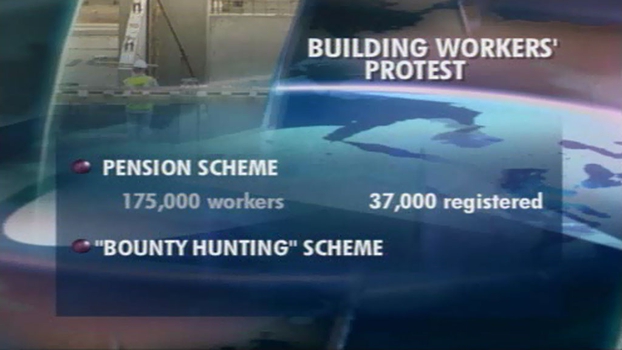