A new £5 note for Ireland is the latest in a series of bank notes designed by Robert Ballagh.

The new bank notes feature people who helped to create modern Ireland. Sister Catherine McAuley, founder of the Sisters of Mercy had been chosen for the front of the £5 note. The back showed a classroom with a verse from the poem 'Mise Raifteirí an File' by Antoine Ó Raifteirí on the back.

Catherine McAuley was a truly extraordinary woman. She is remembered not only for her achievements during her own lifetime but also for the continued success of the congregation she founded.

This is one of the last public events Maurice Doyle will attend as Governor of the Central Bank. Minister of Finance Bertie Ahern thanks Maurice Doyle for all his assistance and advice.

Guests at the launch include Sr Bonaventure Brennan, who is pleased to see Sister Catherine McAuley back in circulation.

An RTÉ News report broadcast on 15 April 1994. The reporter is Una O'Hagan. 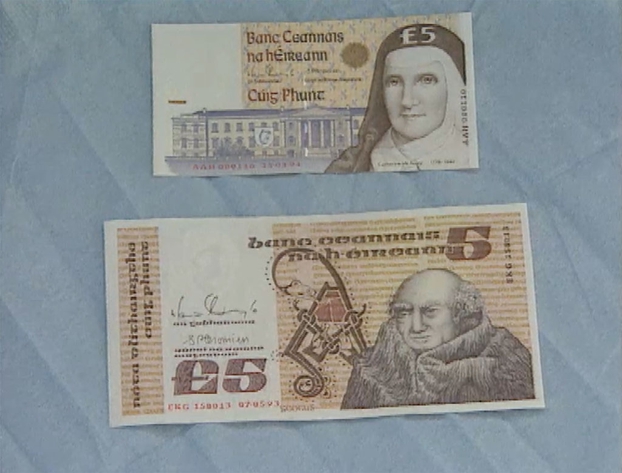