Whiskey making in the Powers Distillery in John's Lane, Dublin prior to its relocation to Midleton in County Cork.

There was a time when Dublin city centre was a hub of thriving industries, in this case Powers Distillery, founded in 1791 by James Power, who already had a hostelry at this location,

Behind the church of Saint John and Saint Augustine in Thomas Street, and at the edge of Scandinavian and medieval Dublin...

Powers Distillery became part of the Irish Distillers group in 1966 [the other distilleries at that time being Cork Distilleries Company and John Jameson & Son, and in 1976 moved to new and more modern premises in Midleton, Cork.  Before it closed its doors for the last time, 'The Arts Programme' visited the John’s Lane distillery, to record the workings of this old and curiously attractive plant.

The whiskey is distilled from beer, which distillers call ‘wash’, made from barley which is dried and ground on site by huge millstones made from slabs of granite.  Pot stills might come to mind when people think about whiskey making, but the heart of the process is the mashing, when the barley, malt and water at a temperature of 150 degrees are mixed together in a mash tun,

The scale of the machinery, the sense of power, the humidity, and the curiously pleasant smell of warm crushed grain is not easily forgotten.  The quality of the water used is important, and this is one of the major factors in locating a distillery.

In time, the rakes stop beating, what is left of the grains settles to the bottom, and the long process of draining the mash starts.

These mash tuns hold about 33,000 gallons each, and this liquor is the raw material for beer, known in the trade as wort.  The spent grains are then manually shovelled out through small holes in the floor of the tun. Due to the heat and humidity, this is a task which cannot be done in a hurry,

Although the work is tough, it’s not dangerous, rather like taking strenuous exercise in a Turkish bath.  But it does serve as a good reminder that working conditions in our industrial past were far from ideal, and often worse.

Following the distillery’s closure, many of its buildings were demolished, but those which did survive now form part of The National College of Art and Design.

This episode of ‘The Arts Programme’ was broadcast on 15 May 1977.  The presenter is Andy O'Mahony. 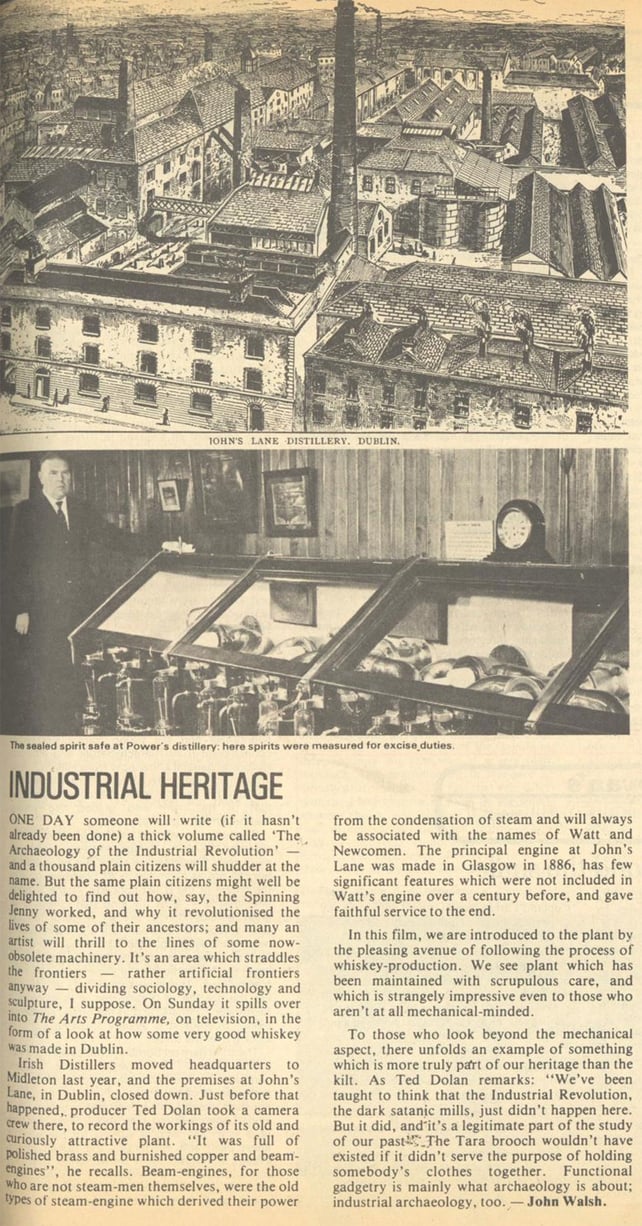 ‘The Arts Programme’ was a series on the arts which ran for one season on RTÉ Television, on Sunday nights from 20 March until 15 May 1977.  Produced by Ted Dolan, and featuring a different presenter each week, it was described in an RTÉ Guide article of 18 March 1977 as most definitely not being a magazine of the arts.  Instead, each programme in the series had a different format, ranging from a documentary-style programme, review-style programme, discussions in studio with a selected panel of contributors, or even an occasional programme of 'foreign-made material'.  Presenters included Patrick Gallagher, Anthony Cronin, Andy O’Mahony, Diarmuid Ó Muirithe, and Claude Cockburn. A Taste of Dublin Guinness 1987