The site for the Gulf crude oil terminal on Whiddy Island, Bantry Bay in Cork is blessed and a commemorative stone unveiled.

Minister for Transport and Power and Post and Telegraphs, Erskine Childers unveils a commemorative stone at the £10 million Gulf Oil Corporation crude oil terminal on Whiddy Island, Bantry Bay in County Cork to mark the blessing of the site by Most Reverend Cornelius Lucey, Bishop of Cork and Ross.

When it goes into operation in 1968, the Whiddy Island terminal will be one of the biggest storage depots for crude oil in the world, with a total capacity of a million tons.

An RTÉ News report broadcast on 6 April 1967. The footage shown here is mute. 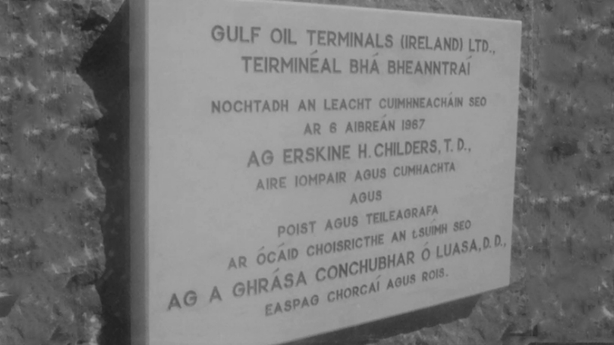 The Dubliners At Bantry House 1982