After weeks of controversy over the venue for Féile, the music festival gets underway at Páirc Uí Chaoimh in Cork.

Féile had been held at Semple Stadium in Thurles since 1990. Controversy surrounded the search for a new location for the event and finally planning permission was granted for the festival to be staged in Cork. However promoters MCD still faced opposition from local residents and objections to the location and facilities for a campsite.

Eventually, the green light was given and the wagons began to roll in.

Over the past week, preparations have been going on at Páirc Uí Chaoimh to welcome the music fans to the venue for the much loved three day festival. 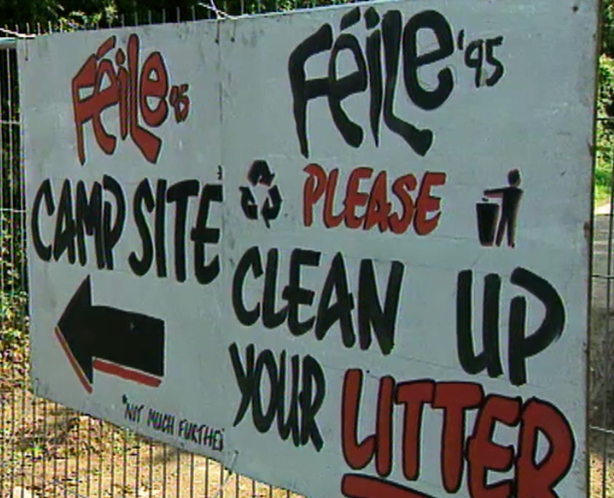 There will be over four hundred security staff on site throughout the festival who will be working closely with Gardaí. Their focus will be on alcohol and drug abuse.

Concert promoter Eamonn McCann of MCD is confident that they are well prepared for all eventualities.

As the fans make their way to the campsite and prepare for a weekend of music and partying, the Gardaí are confident that they will be able to handle any unruly situations.

Superintendent Tom Waldron explains that alcohol will not be permitted within the stadium and can only be consumed in the campsite.

Festival goers will be pleased with the weather forecast for the weekend with temperatures expected to soar to the high 80s. Reporter Barrai Mescall is slightly more sceptical commenting that,

Anyone who lasts the three days should get a medal.

The line up for the festival included The Prodigy, Moby, Kylie Minogue, Blur, The Beautiful South, The Stone Roses, Paul Weller, Elastica and many more.

An RTÉ News report broadcast on 4 August 1995. The reporter is Barrai Mescall.