The night before Bob Dylan took to the stage at Slane Castle, the village of Slane witnessed violent scenes and clashes with Gardaí.

Following a number of arrests, a crowd of about forty gathered outside Slane Garda Station. The crowd quickly grew and the station was surrounded for around an hour and a half. Rocks and missiles were thrown at the station breaking nearly all the windows.

At one stage there were as many as a thousand people besieging the station.

A Garda personnel carrier and two other cars were burnt out.

Relatives of Gardaí who live above the station were said to be terrified.

Despite there being around eight thousand people in the town, there were only twelve Gardaí on duty and reinforcements had to be brought in from surrounding towns. When Gardaí left the station to disperse the crowd, blocks and bottles were thrown at them resulting in a baton charge. The situation was brought under control at around 3 am.  Eight Gardaí were injured and one remains in hospital. Eleven civilians were taken to hospital and five of them have been detained.

Eyewitnesses describe the horrific scenes on the street as the riot broke out,

The cop shop's in bits.

Rows were breaking out simultaneously up and down the street so it all went into one big frenzy.

Following the riot, the Main Street of Slane was covered with refuse and broken glass and a big clean up operation got underway ahead of Bob Dylan's performance that night.

One concert goer described the scenes as

Many Slane locals are now saying that they don't want any more concerts to take place in the town. Local publican Michael Kelly was disgusted by the violence and had to close his pub for the day. He described the Rolling Stones concert in 1982 as "a teddy bear's picnic" in comparison.

People were actually afraid in their own homes. 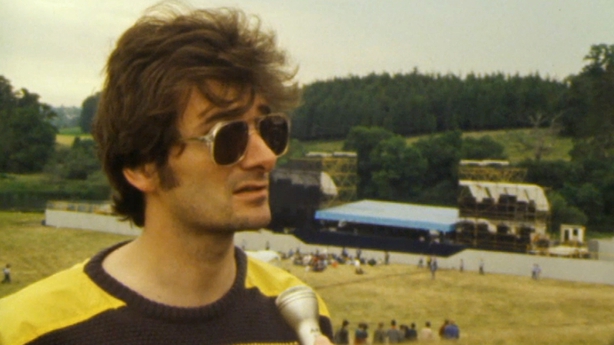 Lord Mount Charles, the owner of Slane Castle, said that the disturbances in the town will make him think hard about future concerts.

When you have fifty people drunk out of their mind with too much liquor, it just got out of hand. It was appalling.

An RTÉ News report broadcast on 8 July 1984. The reporter is Joe O'Brien.