Having his novel 'The Dark' banned was funny in hindsight but not at the time says John McGahern.

The novelist and short story writer John McGahern trained as a teacher and taught in Drogheda and Dublin for a number of years.

It’s very hard work, but I think it’s a very honourable way of earning a living, one has a feeling one can do good.

Following the success of his first novel, ‘The Barracks’, John McGahern was given a year’s leave of absence from his position as a primary school teacher in Clontarf. He expected to return to his job. However, when his second novel ‘The Dark’ was banned by the Irish Board of Censorship in 1965, McGahern was summarily sacked for writing an allegedly pornographic book.

The parish priest told John McGahern that Archbishop of Dublin, John Charles McQuaid had ordered the dismissal so there was nothing he could do about it. 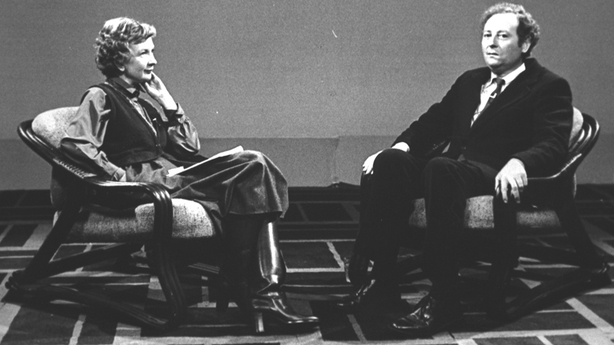 John McGahern went to his union about the dismissal. He was told they could handle the case if it was just the matter of the book, but he had also married a Finnish woman, Annikki Laaksi, in a registry office.

The matter was raised in the Dáil when the leader of the Labour Party Brendan Corish questioned the Taoiseach Jack Lynch. Citing the special relationship between the church and state, the Taoiseach said he could not answer the question.

John McGahern found being at the centre of such a scandal was a nuisance, but he went to London and continued to teach there. He is not bitter that he had to leave Ireland because

I’ve always thought its a sort of dangerous activity to be a writer anyhow, you know, and you have to be prepared for that kind of thing.

John McGahern returned to his native Leitrim dividing time between writing and working on a small farm.

In the series 'States of Mind' journalist Mary Holland talks to a diverse section of interviewees. By exploring their backgrounds and the influences that formed them, she hopes to discover through their eyes something about the state of Ireland.

This episode of 'States of Mind' was broadcast on 18 July 1979. The presenter is Mary Holland.