The half crown, the farthing and the ha'penny will be no more when new coins come into circulation in a step closer to decimalisation day.

Ireland's new decimal coins, smaller and more in line with European coinage, are currently being minted, and due to be ready by September.

The money in our purses and pockets is changing. The days of the farthing and ha’penny are numbered, as they will cease to be legal tender on 1 August 1969.

The half-crown will also not have an equivalent in the new decimal coinage and is due to be withdrawn from circulation on 1 January 1970.

A brand new seven-sided coin, the fifty pence piece, will be in circulation by February 1970, replacing the ten shilling note. It will have the woodcock design, which is currently on the farthing. The pound note and other banknotes will remain in their current incarnations. 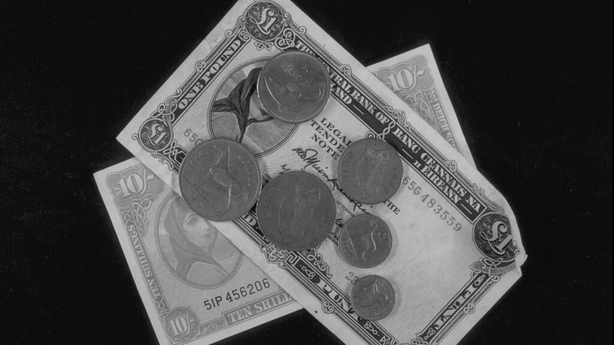 The changes now provide the Irish consumer is with time to acclimatise themselves to the new world of decimalisation, which will officially begin on 15 February 1971.

On that day three new bronze coins will make their appearance – the new ha’penny, penny and twopenny. They will be the same size as the old threepenny bit, twopenny piece and ha’penny respectively.

Very shortly you’ll see a lot of change in your change.

An RTÉ News report broadcast on 25 June 1969.  The reporter is Tom McCaughren.