One local bodhrán players extols the virtues of the instrument. He learned the tin whistle and the accordion when he was young, but he gave them up when he discovered the bodhrán.

I love playing the bodhrán, I could keep playing it from night until morning.

Sonny Canavan raises goats to provide the skin for his instruments and he gave this particular man a goat so he too could make a bodhrán. The man explains that after he shot and skinned the goat, the skin was buried for nine days it was then dug up and putting in on the bodhrán rim.

Listowel playwright John B Keane pays a visit to Sonny’s cottage to check on his availability to speak to an American author who is writing a book about the origins of drums. In the ensuing conversation Sonny mentions there is certain herb in the bog that his goats like and the resulting goat’s milk is great for virility.

There was an old lad there, back there, he was 101 years, and he was so sexy they had to lock him up, after the goat’s milk.

Early productions of John B Keane’s acclaimed play ‘Sive’ featured Sonny's bodhráns and he plays the instrument and sings a verse of a song from the play accompanied by Sonny.

A 'Newsround' report broadcast on 13 January 1977. The reporter is by Brendan O'Brien. 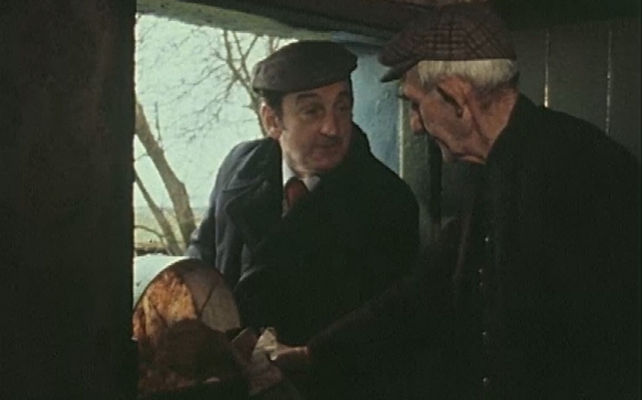