A showcase for the Irish fashion industry, Futura Fair opens at the RDS with tailored styles and daring fabrics.

The fair showcases the fashions that will be on sale to the public in the following spring and summer. The overall trend is a move away from the weird excesses of recent times and there is a focus on men’s fashions.

Despite the recession, business at the fur coat stand is steady and in the other extreme swimwear is also being modelled. Mr Ireland Frank McCormack can be seen in action at the sports gear stand.

Following some lean times, Managing Director of Futura Fair Gerry Murphy thinks confidence has been restored in the rag trade. However, people are spending more sensibly with

Much greater emphasis on style, on longevity, of the clothes that you buy.

An RTÉ News report broadcast on 28 September 1986. The reporter is Joe O’Brien. 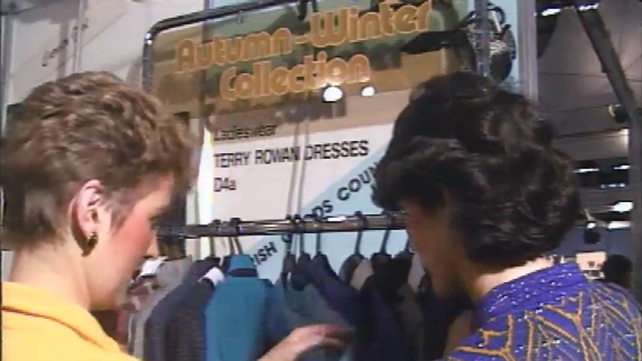