Production is underway for the dram that will replace 'Glenroe' as Sunday night television viewing.

'On Home Ground' is a drama series based around the fortunes of a GAA club, its players, their families and the community in which they all live. 'The Kills' are the football team from the fictional Kildoran GAA Club. Having failed to win anything in the Kildare Club Championships since 1971 they are on a mission to reclaim their dignity under the guidance of the senior team coach played by Sean McGinley.

We're not trying to replace Glenroe. We're coming up with a new drama for an Irish audience.

The series is produced by Little Bird for RTÉ and is one of the most ambitious dramas to be made for the station with over a hundred cast and crew.

Producer Martha O'Neill describes the production as a series of eight one hour dramas and is insistent that it is not a soap. The drama will be broadcast on Sunday nights beginning in the autumn.

An RTÉ News report broadcast on 4 July 2001. The reporter is Colm Connolly. 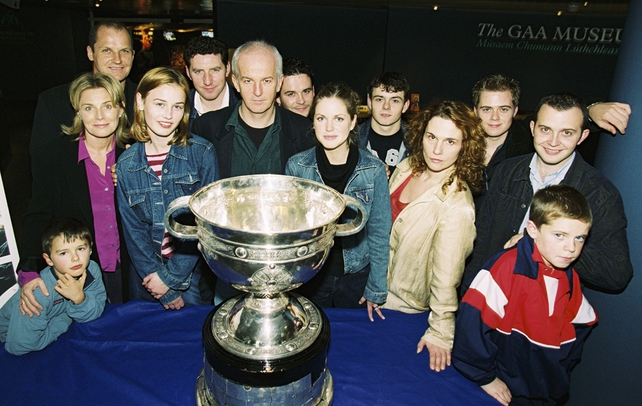 Cast of 'On Home Ground' at launch in the GAA Museum, Croke Park in October, 2001