The Late Late Show audience give their reaction to the opening episode of Family the television drama written by Roddy Doyle.

The first episode of the ground-breaking urban drama 'Family' was broadcast on RTÉ on 3 May 1994. An RTÉ/BBC co-production, written Roddy Doyle and directed by Michael Winterbottom.

Each of the four parts focused on a different member of the Spencer family. The first episode of 'Family' was about husband and father Charlo, an unemployed criminal who is abusive and violent towards his wife Paula.

A 'Late Late Show' debate on the issues raised by the opening episode shows the effect the drama had on the Irish public. Members of the audience discuss the portrayal of domestic violence in the drama.

Writer Roddy Doyle responds to criticisms of the drama's use of Ballymun as a location, saying he never set out to hurt the people of the area. Ballymun was chosen because as an urban setting it works as an international landscape.

The Late Late Show broadcast 6 May 1994. The presenter is Gay Byrne. 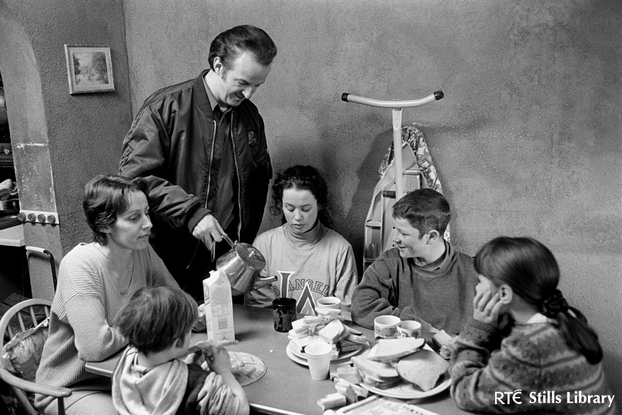