Celebrating 750 years of Ballintubber Abbey in County Mayo, historically and architecturally significant and a symbol in stone of the Irish people.

Seán Duignan takes a look at the historical and architectural significance of the 13th century Ballintubber Abbey dating back to the reign of Cáhal Mór of the Wine-red Hand. Cáhal Mór built the Abbey on the site where 800 years previously Saint Patrick had built a church. Ballintubber Abbey is a contemporary of the great cathedrals like Notre Dame and was built thirty years before Westminster Abbey and 300 years before Saint Peter's in Rome.

Architecturally, Ballintubber Abbey is recognised as one of the best preserved examples of its kind in Europe. But it is much more than that. It is a symbol of the living faith of the people of Ireland.

These inanimate walls have much more than just antiquity, just much more than architectural work. They contain a symbol, a symbol in stone of the history of the Irish people.

Partially burnt in 1265, it was rebuilt in 1270. The abbey was stripped of all its lands and possessions by Henry VIII, people continued to worship there. In 1653, Oliver Cromwell's soldiers terrorised the land and tried to destroy the abbey. While many of the monastic buildings lay in ruins, the abbey church survived. Throughout the penal days, the people of Ballintubber continued to attend mass at the roofless Abbey. When the Famine came, it looked as if it would never be recovered. Throughout all of these challenges, mass has continued within the walls of the abbey.

Surely it deserves the proud title of The Abbey That Refused To Die.

Rev Thomas Egan, CC, is the man behind the restoration drive of Ballintubber Abbey which began in 1963. Recognising that the restoration of the abbey is ongoing, Rev Thomas Egan references Ireland’s first President Dr Douglas Hyde who wrote The Religious Songs of Connacht where he referenced the Prophecy of Saint Malachy which says that when Ballintubber Abbey would be reroofed, then Ireland would be free.

Chief Celebrant of the High Mass, Archbishop of Tuam the Most Rev Dr Walsh draws a lesson from the celebrations for the people of Ireland and in particular the people of the West of Ireland.

We may be confident that the people of the west have still got the will to survive.

There were also military honours with an officer’s guard of honour and army trumpeters sounding the salute. A choir of twenty four priests from the Tuam Arch Diocese provide the music during the ceremony.

The congregation at the ceremony was largely made up of families from the parish, descendants of the people who kept the abbey and the faith alive in Ballintubber. The people of Ballintubber have already contributed over £5,000 towards the cost of the restoration.

An RTÉ News report broadcast on 8 September 1966. The reporter is Seán Duignan. 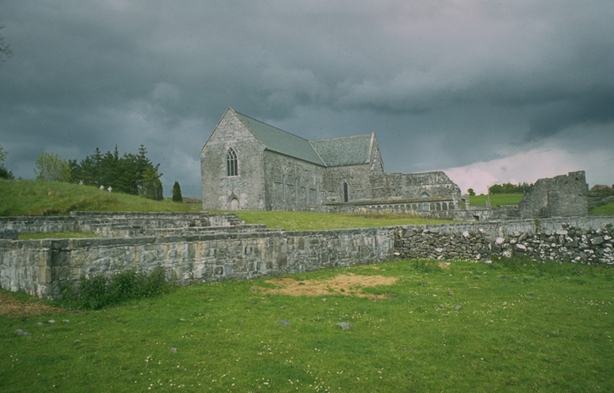