A stark reminder of the power of the sea, the remains of the Calf Rock stands a few miles off the tip of the Beara Peninsula off west Cork. The rough seas took their toll on the lighthouse in November 1881 when it was destroyed by a violent storm. The six men on the rock had to wait for six weeks before being rescued.

Eight years later, another lighthouse beam could be seen in the area with the construction of a lighthouse on the Bull Rock.

Lighthouse Keeper Tommy Power has spent all his working life in lighthouses on and off the coast. A native of Castletownbere, Tommy comes from a family of lighthouse keepers. For Tommy, life on Bull Rock was challenging at first but as time goes by you get used to it. Having spent most of his working life away from his family, he says it is like going to the office every morning. 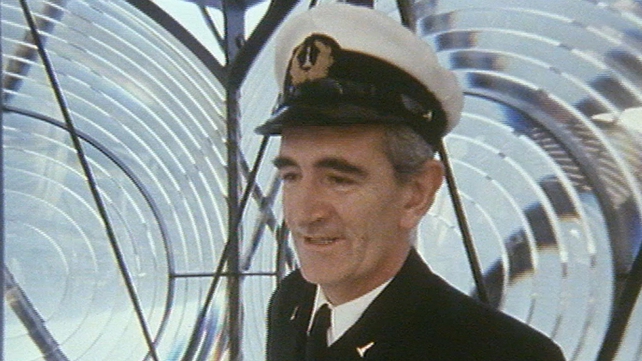 Times have changed with advancements in technology since Tommy Power joined the service. The dangerous boat trips have now been replaced with short helicopter journeys on and off the rock.

Three new recruits, who have just finished four months training at the Irish Lights Headquarters in Dublin, arrive on the rock by helicopter for a two week stay. Now, they will spend a few weeks at a time on various lighthouses around the coast. They will spend their first term of duty on an island on Bull Rock and their only contact with the mainland will be by phone or radio.

John, Francis, and Gerry now have the opportunity to put what they have learned into practice. Conditions on the Bull are much better than they used to be and the men who manned the Bull Rock in 1889 would hardly recognise the place which now has central heating, a telephone to the mainland and even a television. The recruits also have their own living quarters with many modern conveniences.

The life of a lighthouse keeper is a lonely and often uncomfortable one.

This episode of 'PM' was broadcast on 23 January 1979.  The reporter is Doireann Ní Bhriain.

The music accompanying the programme was composed by Jolyon Jackson.

'PM' was a magazine series reporting on aspects of Irish life with interludes for music from Irish performers.

'PM' first began on Tuesday, 20 September 1977 and was initially aired three nights a week on Tuesday, Wednesday and Thursday at 7.00pm on RTÉ 1.