Dublin dock workers jobs are under pressure from container shipping.

Dublin the country's largest port, handled five and a half million tonnes of cargo and about six thousand ships in 1969.

This film is about the deep sea dockers. Tough men with a hard history. Men who now face an overwhelming challenge to their livelihood and who at this critical time are naturally suspicious.

The dockers face the challenge of the rapid onslaught of new technology and ways of working which have revolutionised the transport industry.

The challenge of mechanisation and rationalisation which will soon make the traditional dockers as obsolete as coachmen or lamplighters.

The dockers fear for the future and at first were reluctant to participate in this report. In the end, they agreed that the publicity for their plight might work in their favour.

Dockers talk about the work they do, employment practices, and the challenges they face as a result of the introduction of container shipping.

These containers are large steel boxes of standard sizes of eight feet square and ten, twenty, thirty or even forty feet long. They can be used over and over again and are easily transferred from ships to lorries. They can contain any type of cargo.

They are standardised and easy to handle.

They are transported on specially designed container ships which allow for easy stacking.

Traditionally, ships are loaded and unloaded by men. However, container ships do not need nearly as many men as traditional vessels. Here lies the challenge for dockers hoping to hold on to their jobs.

Waterford Port has the ultimate in container handling where the container terminal is owned by the Bell Shipping Group. The system involves a complete integration of land and sea transportation in one operation which is all controlled by the Bell Group. The fully automated installation at Waterford means that one man can do the job of many as he operates the enormous gantry crane loading and unloading containers. Apart from office staff, only eight men are needed to operate the entire Waterford terminal.

There is next to no manual labour. 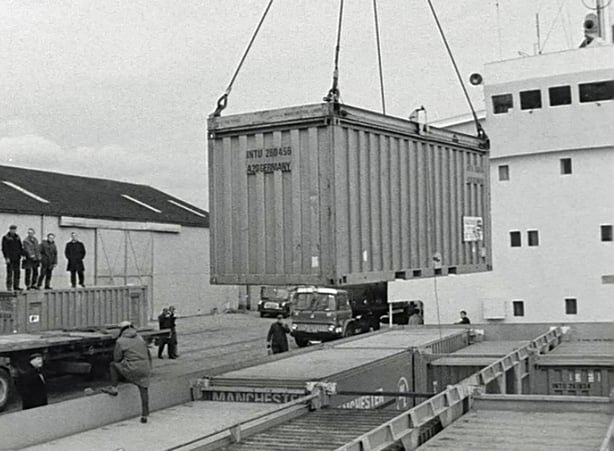 Managing Director of Bell Shipping George Hollwey anticipates that if the same system was introduced in Dublin, the labour force would be reduced to seven units of twelve men. The current labour force is close to two thousand. He says the prospect of potential redundancies is "something quite terrifying".

Around a thousand men are employed as deep sea dockers and the rest are cross channel. The deep sea dockers are still employed on a casual basis whereby each day they must attend a daily ceremony called the read where the employer selects whatever workers they need for the work that is available.

The work is entirely casual. No guarantees, no basic wage.

The dockers are sensitive about these reads and would not permit filming at the event. 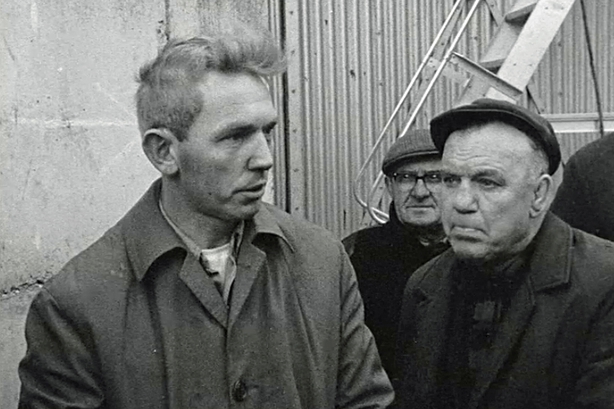 I think it's diabolical that we should have to stand there in this present day and age, and stand in front of any man and be picked out like sheep.

This episode of 'Report' titled ‘Bye Bye The Button Men’ was broadcast on 19 November 1970.  The reporter is Patrick Gallagher and the programme was produced by John Williams. Strike - The Story of Belfast Dockers 1984