A unique and unprecedented insight into the workings of the Irish legal system.

Presenter Kevin Myers asks members of the public about the law in Ireland. For many, the workings of the legal system remain confusing.

The ordinary person's rights before the law are in fact guaranteed by the constitution.

The courts are used now much more in the protection of individual rights.

The legal profession is divided between barristers and solicitors with barristers handling court work, although much of their work is in fact settled out of court. 450 Irish barristers carry out their work in the Law Library which is part of the Four Courts complex. Their affairs are managed by the Bar Council.

They belong to a unique club. They are fiercely loyal to their institution, the Bar, and generally proud of its traditions.

The Secretary of the General Council of the Bar is Geoffrey Coyle who explains that Ireland is the only country that has the unique setup where all the barristers work together in the law library. While it may be noisy and overcrowded, it is cheap which is beneficial for young barristers starting out. 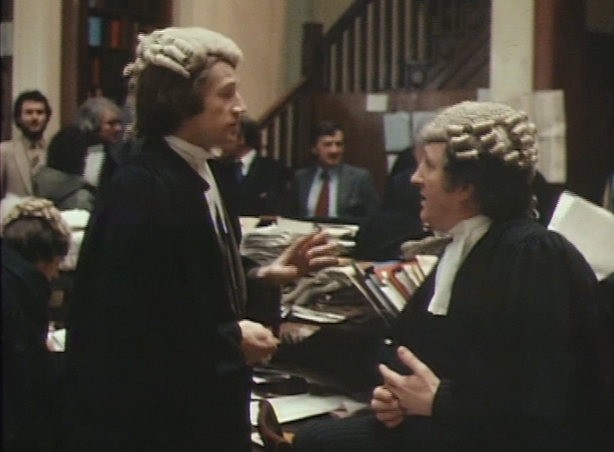 Barristers in the Law Library at the Four Courts (1980)

The library is a busy place and one with codes of conduct and secrecy. A red line on the library floor can only be crossed by barristers. This is to prevent any confidential information falling into the wrong hands.

Nobody can come in beyond that red line.

It is the job of the law library crier, who sits outside the red line, to assign barristers to solicitors upon request.

The programme was made with the cooperation of the General Council of the Bar of Ireland and the benchers of the King’s Inns which secured for the first time permission to film the activities in the Bar Library at the Four Courts.

Within the Four Courts there is an area girt round by a red line, literally a red line on the floor. None but barristers may cross that line. It encloses the Bar Library, headquarters and working-area of the Republic's four hundred and fifty practising barristers. It may seem a symbol of the impenetrability of the law. To the film-camera no less than to a layman, it appears so. Tuesday's 'Insight' documentary on the legal profession in Ireland has taken cameras where they have never been allowed before but many locations are still taboo.

Insight: The Law Courts was broadcast on 4 November 1980. Written and presented by Kevin Myers.  The programme was produced by John Lynch who won a Jacob’s Award for breaking new ground in television documentary.