The lack of jobs, a growing number of school leavers and a limited number of college places mean the demand for a college course is growing and so too are the entry requirements.

For many of us, the day we left school was the beginning of an adventure. In the late 60s and early 70s, emigration was a thing of the past and you could look forward to a job in Ireland once you had a leaving certificate. If you were bright or well off, you went to university and you could also study closer to home in your local Regional Technical College. 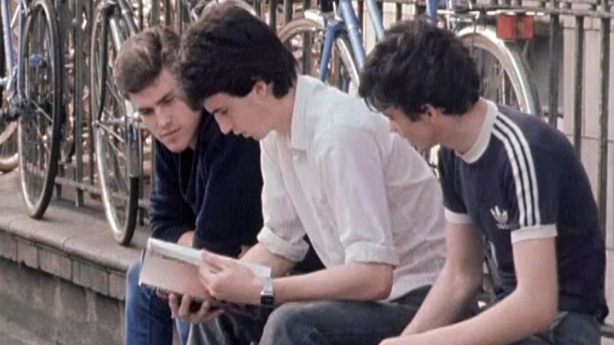 The days of getting a job straight after school are gone and for every single school leaver this year, there are five people in the dole. 30,000 people under the age of 25 are still looking for their first regular job. As a result, more and more school leavers are trying to get into college. As demand for college places has gone up so too have the points need to get a place.

Every year, you need more and more points to get into college.

Eamon Tuffy, Education Officer with the Dublin Institute of Technology (DIT) explains that the rising points are the result of the excess demand over the number of available places. The points system is the mechanism used to select the limited number of students and inevitably as demand goes up so too do the points.

The more points you get in the leaving cert, the more likely you are to get the place of your choice in the college of your choice. However, only one in four actually achieves this.

For the leaving class of 1985, it's been a particularly competitive points race.

The points race is felt strongest in Dublin where there has been a huge explosion in the number of school leavers. While the number of school leavers in Dublin is increasing to a greater extent than in the rest of the country, they are getting fewer college places. In Dublin, only 17 out of every 100 school leavers go to college. In comparison, in Carlow 29 out of every 100 school leavers go to college and in counties like Kerry and Sligo, the figure is 25. To add to this pressure, Dublin has no regional technical colleges and existing colleges are already snowed under with demand. Even the most basic courses with minimum entry requirements have excess demand.

In 1979, a report by the Higher Education Authority examined the future needs of the higher education sector and advised the government to build four new colleges in Dublin. The report recommended colleges to be built in Tallaght and Dun Laoghaire by 1985. The report also suggested building colleges in Blanchardstown and Malahide.

At election time in February 1982, three of those colleges were promised by Fine Gael TD Brian Fleming. Three and a half years later, none of these promises have been delivered and the site for the Tallaght college still lies vacant.

This episode of 'Today Tonight' was broadcast on 19 September 1985. The reporter is Joe Little.