The people of the village of Ardfinnan star in the opening sequence to 'Hall's Pictorial Weekly'.

The small village of Ardfinnan in County Tipperary features an Anglo Norman castle built in 1185. A bridge across the river Suir was constructed shortly after the castle was completed. 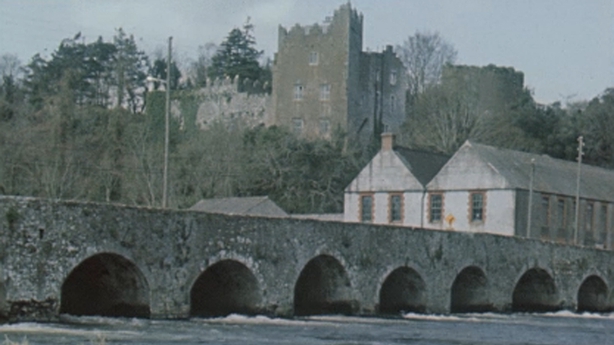 People of Arfinnan going about their daily business include farmers visiting Ardfinnan Co-operative Stores. A man drives a donkey driven cart, a woman carries a basket of groceries and another pushes a pram.

Frank Hall's amusing and satirical series began on 29 September 1971 with the full title 'Hall’s Pictorial Weekly Incorporating the Provincial Vindicator’ which became known as 'Hall’s Pictorial Weekly’.
The series allowed Frank Hall to follow his own interest in the lives of viewers throughout the country. Regarded as RTÉ’s flagship comedy show, it featured satirical sketches on current news stories and popular culture, as well as parody songs, comedy sketches, re-edited videos, cartoons and spoof television formats.

This episode of ‘Hall’s Pictorial Weekly’ was broadcast on 23 April 1975.