A group of protesting women invade the Forty Foot, traditionally a male only swimming point in Sandycove, Dublin.

A group of about 10 women calling themselves the Dublin City Women’s Invasionary Force invade the Forty Foot, a traditional men only public bathing preserves in Sandycove Dublin.

Some of the women hold placards with one stating,

We'll fight on the beaches, we'll win between the sheets.

There was a time when no self-respecting women would be in here anyway.

Another man tries to me more pragmatic, pointing out that people do not have the right to go anywhere they like. They cannot just turn up to Dún Laoghaire Golf Club and expect it to be open to everybody.

We don't rush into Telefís Éireann and say we should have our coffee in your canteen and so on. Why should we?

One of the women  swimming at the Forty Foot says she is asserting her rights and demonstrating that women are not inferior to men.

Traditionally men bathe nude at the Forty Foot before 9 am in the morning. The woman says if that is the rule then she will also swim nude at the allotted time.

I mean we came into this world naked.

Since this protest, women have continued to swim at the Forty Foot.

An RTÉ News report broadcast on 20 July 1974. The reporter is John McAleese. 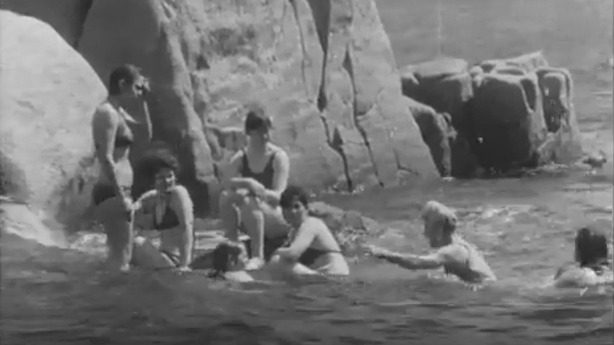