Sinéad O'Connor was ordained a Latin Tridentine priest, Mother Bernadette Marie, in a ceremony performed in a Lourdes hotel suite by the controversial bishop, Michael Cox.

She did not take the decision lightly,

A person shouldn't become a priest unless they take it dreadfully seriously.

The Roman Catholic Church replaced the Latin Tridentine in the 1960s, however Bishop Cox continues to say the Latin mass.

Sinéad O’Connor believes her ordination is valid and lawful. She can perform the sacraments and has said mass a number of time in both Latin and English. She rejects the statement that her ordination is unlawful under canon law.

Nothing you can do Gay Byrne will invalidate my priesthood.

Sinéad O'Connor believes it is only a matter a matter of time before women are accepted as priests. A female member of the audience is pleased to see this issue highlighted, but is worried that Bishop Cox and the Tridentine Church are patriarchal and conservative.

She will continue to perform as Sinéad O'Connor but will wear her priestly garments. He intention is to auction old clothes to provide funds for a charity she plans to establish. Through this charity she will send Travellers on holiday to Lourdes.

What I call my holy trinity is I am a mother, I am a singer and I am a priest, these things are equally sacred to me.

This episode of ‘The Late Late Show’ was broadcast on 30 April 1999. The presenter is Gay Bryne. 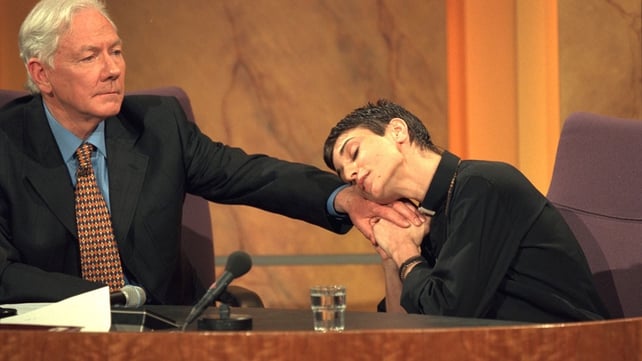