How are Catholic priests ordained? RTÉ cameras filmed a ceremony in the College Chapel at Saint Patrick’s College, Maynooth.

Catholic Primate of Ireland and Archbishop of Dublin John Charles McQuaid presides over the ordination ceremony.  The culmination of seven years of preparation by the seminarians, it is filled with music, prayer and ritual.

The candidates are called by name, and one by one come to the altar holding a lighted candle,

Each steps forward with the reply of ‘adsum’, ‘present’.  This is a formal expression of their call to serve the church, and their free acceptance of it.

During the prostration ceremony, the young men lie face down upon the floor of the sanctuary, as a sign of their unworthiness before God, while the choir chants the litany of the saints. They are then given a special blessing by the Archbishop.

Silence falls as the most solemn moment of the ordination takes place. The bishop lays his hands on the head of each man,

By placing his hands on the head of the candidate the bishop is indicating precisely each person upon whom the power of the sacrament of Holy Orders is being conferred.

‘Ordination Of A Priest’ was broadcast on 9 May 1963.  The commentator is Padraig O'Raghallaigh. 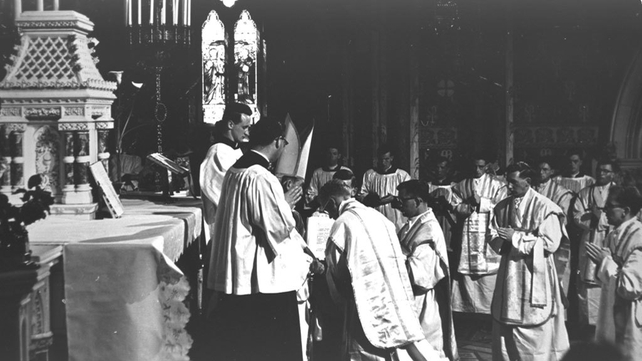 The Irish Are The Backbone 1969