The Under 18 squad celebrate a second under age European soccer title for the Republic of Ireland in the same year.

A momentous year for Irish football, with both the Under 16 and Under 18 sides winning the European Championship titles.

The day following the Republic of Ireland Under 18 side beat Germany in the final, the squad relaxed by the pool in Cyprus.

Penalty shootout hero Liam George describes what it was like to take that crucial spot kick with the full support of the Irish team and fans. 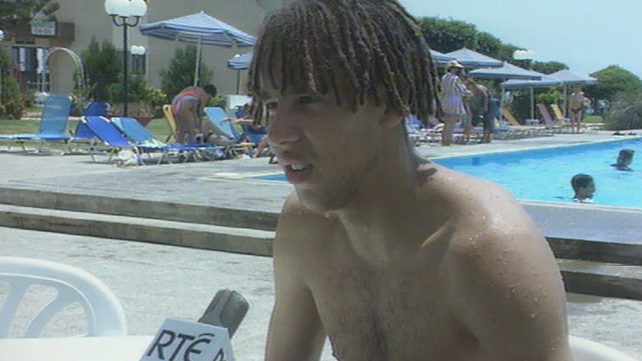 Eighteen-year-old Robbie Keane is at a loss for words to describe the secret to Brian Kerr's success.

Nobody would ever think that Ireland could win two European Championships in the one year. To be honest with you, I can't really say how he does it.

Team Manager Brian Kerr has taken time out to think about his side's success.

I had a good little laugh to myself. The idea that Ireland had won both of the European Youth Championships.

For Brian Kerr, the victory is down to the players.

An RTÉ News report broadcast on 27 July 1998. The reporter is Clare McNamara.