A group of women have come to Donegal to set up a sanctuary from the modern world.

The Silver Sisterhood, also known as Rhennes, arrived in Burtonport, Co Donegal in September 1982 from a small town in Yorkshire. They call themselves Rhennes in honour of a mythical goddess who was half maid, half-mare. They have their own language, music and a deep tradition of crafts in a pre-mechanised lifestyle. They wear full-length dresses and shawls and keep their heads covered when in public.

It's here next door to the raw Atlantic they plan to establish their village. It's to be a sanctuary from the modern world.

All of the group were strangers from different backgrounds before arriving in the Donegal town. The group is all women apart from one man, and refer to themselves as 'maids' rather than women. The role man has played in civilisation has no place in this community.

The group's spiritual leader Sister Angelina tells RTÉ News about the origins of the group since its foundations in Devon and Cornwall.

The Rhennish tradition is the most ancient religious and cultural tradition in New Zealand, that is to say in Britain and in Ireland, and we worship God as the mother and everything we do is centred around that worship.

This tradition extends beyond acts of worship to the crafts they practice, their language, their songs and their stories. The group have a strong work ethic which is an integral part of their spirituality. 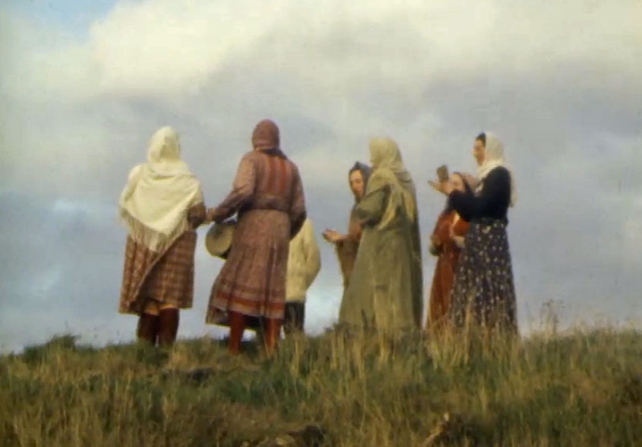 In their new home by the sea, music and storytelling are now daily occurrences all spoken through the Rhennish tongue which dates back to the 14th century. All of their musical instruments are handmade by community members. They also make their own clogs, which they wear and will soon be sold to the public. They also plan to sell embroidered cloths depicting important Rhennish beliefs in the tree of life.

The maids live a simple existence without electricity or modern appliances in this centre which was once the home of the Screamers called 'Atlantis', and has now been renamed as 'An Droichead Beo' (The Bridge of Life). More members from Yorkshire are due to arrive at the centre before Christmas.  In keeping with their pursuit of self-sufficiency, they plan to grow their own crops and have already begun to work the land around the centre.

While they mix little with the outside world, they have so far maintained a harmonious relationship with the local community.

For all their friendliness these new settlers aren't quite what you expect to find in a Donegal fishing village.