Despite opposition from fans it seems there is no keeping Shamrock Rovers at Milltown which is destined for housing development.

The board of management of Shamrock Rovers announces that the club is to move from Glenmalure Park in Milltown for Tolka Park and the hardline fans are not happy.

Fifteen years ago the Shamrock Rovers Club was acquired by the Kilcoyne family, the principals in the construction company Healy Homes. Over this time they have invested time and money in making Rovers the leading club in the country. However, success on the pitch was not seen in revenue at the turnstiles. The decision was made to sell Glenmalure Park for property development and Shamrock Rovers will move across the Liffey and share Tolka Park with Home Farm. However, this decision has been met with hostility by hardline Shamrock Rovers fans.

We don't want to move from Milltown.

Protests became more formal with the formation of the group 'Keep Rovers At Milltown' (KRAM). Through fundraising efforts, they managed to offer the Kilcoynes £300,000 for the club. While the offer is still on the table, nothing has changed in three months.

Rumours have begun to spread about the motivation behind the Rovers. One such rumour was that this was an effort to pump cash into the Kilcoynes building business. The Rovers ground in Kilmalure Park in Milltown is valuable real estate and the rumours have now been revealed to be correct as the Milltown grounds are to be sold for property development.

Director of Shamrock Rovers Paddy Kilcoyne outlines their plans to sell the site and says that Healy Homes has no plans to develop the site themselves. He also defends any suggestion that they were in it just to make a financial killing. He also claims that the Kilcoynes have invested between £750,000 and £1,000,000 in Shamrock Rovers over the years and that their commitment to the club remains strong despite the move.

Running a football club is not a democratic exercise. It's a question of trying to meet your commitments and your responsibilities.

Fergus O'Donoghue SJ outlines his shock, surprise, and sadness at the decision to sell. The land had previously been owned by the Jesuits and Fergus O'Donoghue says that if they had known the intentions of the Kilcoynes, they would never have sold them the land. 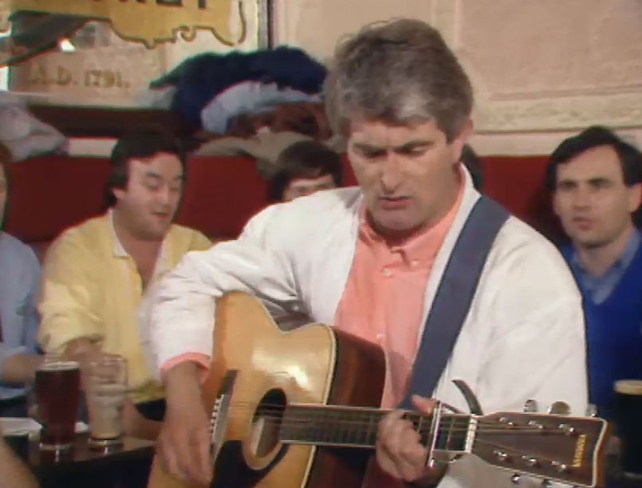 Kilcoynes are just tearing the heart out of Shamrock Rovers.

Gerry Mackey of KRAM says that the group will do everything in their power to oppose any development on the grounds at Milltown. Fianna Fáil TD Tom Kitt believes that any planning application on the site will face opposition and he wants to make sure that no JCB moves onto the pitch.

We want to preserve it as number one a football pitch, and also a very important local amenity.

It also appears that the terms of use of Tolka Park for Shamrock Rovers are far from accommodating.

The saga of Shamrock Rovers and the future of the grounds remain unresolved.

This episode of 'Today Tonight' was broadcast on 13 August 1987. The reporter is Nick Coffey.