Silversmith Jonathan Fyffe is on a mission to save Belfast's Jennymount Street from the bulldozers.

In 1979 Jonathan Fyffe moved from Omagh to attend the Belfast School of Art. As a student he lived in Jennymount Street off the York Road in north Belfast. Jennymount Stree dates to the 1850s. The houses were originally leased to the workers of the nearby Jennymount Mill owned by the Thompson family of merchants and bankers in Belfast.

Former Jennymount Street residents include Sidney Lundy who lived at number 42 and now stables a horse in number 47. Another, John McCartney, lived in number 22. He remembers the time a bomb came down his chimney during the Blitz. He also recalls Jennymount Street’s tight knit sense of community,

We were so friendly with each other we nearly knew what each other had for breakfast.

As residents moved away, Jennymount Street fell into disrepair. By 1980 Jonathan Fyffe was able to buy numbers 2 and 4 for £200. He eventually bought every one of the 49 houses on the street.

I went to buy the one house next to me as a buffer zone between me and a dereliction and discovered there was several other houses up for sale and it all started from there.

Jonathan Fyffe wants to see Jennymournt Street become a centre for crafts workshops and antique shops. As a first step he has opened his own architectural salvage business on the street.

Local grocer Mary Gault welcomes Jonathan Fyffe’s vision for the street. She hopes it will bring a much needed influx of people to the York Road area from other parts of Belfast.

However the restoration and rebuilding of the houses is an enormous task. Robert Crawford of the Belfast Action Team a government body tasked with developing inner city growth is non committal about Jonathan Fyffe’s chances of success.

But Jonathan Fyffe is confident in his project, it may take time but it will be successful. He quotes Jennymount’s original developer Galloper Thompson,

He’d rather have the lowest seat in Jennymount Street than the highest seat in heaven, that’s exactly how I feel too.

An RTÉ News report broadcast on 22 October 1991. The reporter is Alasdair Jackson. 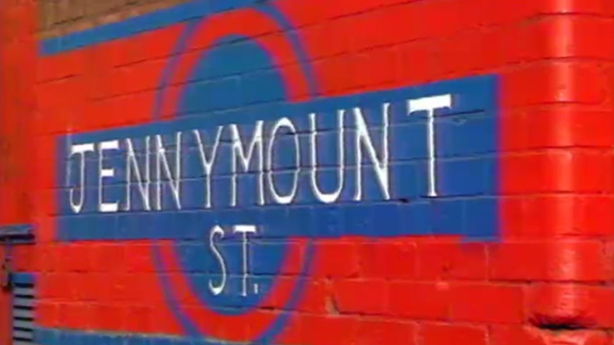