The end of an era for entertainment in Dublin as the Theatre Royal closes.

On 30 June 1962, the Theatre Royal closed for the last time. The following day, 'The Royal Years' an hour-long documentary was broadcast to mark the theatre closing after thirty years. Many of the notable artists from Ireland and elsewhere, who contributed to the theatre's colourful history were interviewed.

The closing of the Royal is a sad occasion for me considering I spent so many years here.

Actor of stage and screen Noel Purcell recalls the tough times and hard work when starting out at the Theatre Royal when the people came in their thousands. He recalls a gag they used to crack during the war.

Come to the Royal. It's cheaper than lighting a fire.

The war years gave the actors and entertainers time to hone their craft as they set out to put on a fresh show each week for audiences. Noel Purcell applauds the work of dialogue writer Dick Forbes in helping to keep the theatre going. Dick Forbes' daughter Pauline fondly recalls her time growing up in the Theatre Royal, which has given her both happy and terrifying memories.

Noel Purcell also pays tribute to the regular visitors to the venue.

They got to know us and we got to know them. They were wonderful days and now it's going to close.

Both Noel Purcell and Pauline Forbes lament the loss of the Theatre Royal.

Some of you old timers looking in at us now. You spent many happy days here. Didn't you? Well they were happy days for us giving you that pleasure.

'The Royal Years' was produced by Tom McGrath and directed by William Harpur and was broadcast on 1 July 1962. 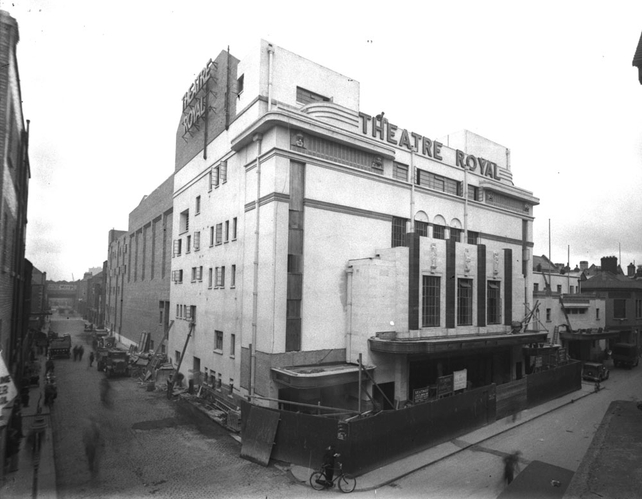 Theatre Royal (circa 1935) prior to opening. Cashman Collection.

The Theatre Royal on Hawkins Street, Dublin opened on 23 September 1935 with a capacity for around 4,000 audience members and at the time was described as one of the finest theatres in Europe.