Astronomer and broadcaster Patrick Moore explains the significance of Birr Castle in the study the stars, the planets and space.

The Royal Astronomical Society hold their annual meeting at one of the famous seats of early astronomy in Birr, County Offaly. Every year,  (RAS) holds an "out of town meeting" in various locations throughout the British Isles. In 1982 they came to Birr, County Offaly.

Since we were in Dublin, the obvious place to visit was Birr Castle, which after all is really the cradle of modern type astronomy.

Writer, broadcaster and astronomer Patrick Moore describes the importance of Birr Castle in modern astronomy and the location of one of the most extraordinary telescopes ever built. It was completed by the third Earl of Rosse in 1845. The telescope has a mirror of 72 inches in diameter, larger and more powerful than anything built before.

He turned it towards the sky and he looked particularly at the at the faint, fuzzy objects that they called nebulae and he discovered that some of these were in fact great spirals. And we now know that these were external systems so far away that their light takes millions of years to reach us. And for a long time this was the only telescope in the world that was capable of showing these spiral forms.

To mark the visit of RSA to Ireland, Armagh Planetarium sent a special team to Birr, who brought with them a portable planetarium. For three weeks, school children around Offaly will be able to visit it and take a simulated star trek. 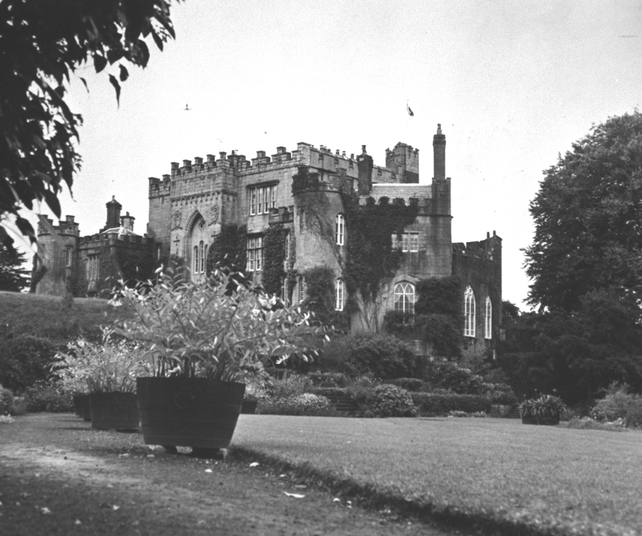 A selection of astronomical instruments and tools is also on display at Birr Castle. One device measures the quantity of heat sent to earth from the moon.

While not an astronomer himself, Lord Rosse, owner of Birr Castle, recognises the need to preserve our scientific heritage and to make it accessible to anyone interested in it.

The best contribution that we can make is by continuing to preserve the scientific heritage that we're lucky enough to have here and making this increasingly available to the youth of Ireland, students, tourists from abroad and everyone who's interested in our scientific heritage.

The annual general meetings of the Irish Astronomical Society are also held at Birr Castle.

This episode of 'Ireland's Eye' was broadcast on 8 April 1982. The reporter is Colum Kenny.