Since the 1970s Paul Flanagan has been creating floats for the Saint Patrick's Day Parade which have won awards and public acclaim.

Floats for the Patrick’s Day Parade are stored by Dublin Tourism in a North County Dublin lock-up. This is where a number of award winning floats created by Abel Alarms, which subsequently became known as ATA Security, are stored. Managing Director of ATA Security Limited Paul Flanagan recalls how his company became synonymous with the Patrick’s Day Parade in Dublin.

The company's first foray into the Saint Patrick’s Day Parade was in 1973 when Paul Flanagan entered a number of vans with rockets mounted on top and children dressed as cops and robbers.

Encourage by this success, the following year he enterd a float in the parade with a Doctor Who and the Daleks theme. In 1975 he was awarded first prize for his float and from 1976 onwards he has been awarded the top prize; the premier award. Rather than fulfilling a need to be the best in the parade, Paul Flanagan say his motivation is simpler,

I just wanted to be an Irish man and I wanted to take part in a parade, and ever since that it has gathered momentum.

People enjoy participating in the parade with the ATA Security floats. Children who took part on Paul’s floats continue to do so as teenagers, including his own daughters Paula and Michelle.

Work on the designs starts in October when the previous parade’s floats are dismantled. Building the new floats starts in November. The theme for each parade entry is chosen in December and based on whatever is topical, however it can change before March.

All of the floats are made by ATA Security staff and they have learned through trial and error what works and how to adapt to the Irish climate. One of their less successful experiments in the 1970s involved papier-mâché.

It was still ringing wet after three months trying to dry it going down O’Connell and we were praying that the thing would hold together.

This year Paul Flanagan is honoured to be the Grand Marshal and he will be sporting a top hat and tails leading the parade.

An ‘Evening Extra’ report broadcast on 16 March 1987. The reporter is Shay Healy. 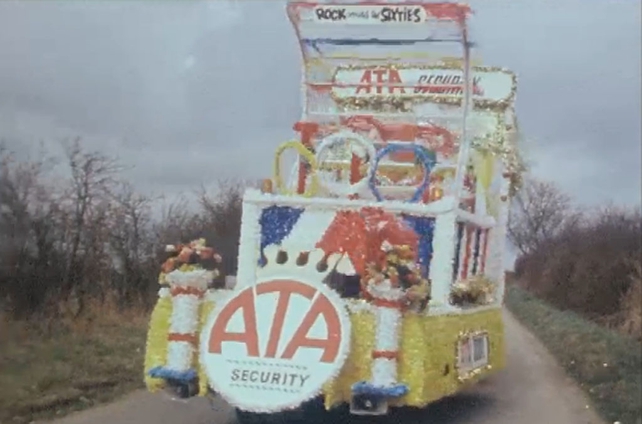